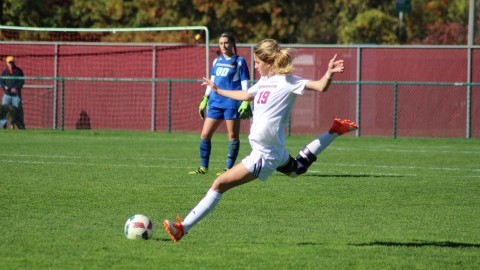 The Massachusetts women’s soccer team fell 2-1 to the Atlantic 10’s number one seed Saint Joseph’s Thursday afternoon in a game where harsh New England weather conditions took control and caused regulation of play to be stopped late in second half.

“It was the decision to play the game, but I just don’t agree with the decision to stop the game 30 seconds after it becomes a countable game,” UMass coach Ed Matz said after the game.

Snow hailed down starting before warmups, as the midfield line as well sidelines had to be shoveled prior to the opening draw. The Hawks (15-1-2, 8-0-1 A-10) put early pressure on the Minutewomen in the midst of both teams trying to figure out how to play to the harsh conditions.

The ball rolled slower than usual, and on multiple occasions stopped dead in its tracks confusing players on whether or not it was still in play or not.

Redshirt junior midfielder Jackie Miller opened up the scoring for the day in the 29th minute after receiving a nice feed from senior captain Megan Burke.

“It was a tough game to play from the onset, you know there wasn’t a lot of soccer being played,” Matz said. “You just kind of had to play to the elements.”

Just 10 minutes later, the Hawks swooped in with an equalizer from leading scorer Dakota Mills, who spun off her defender and got a shot off that just skidded past UMass goalkeeper Cassidy Babin.

In the 51st minute of the second half, the Hawks struck again with what would be the winning goal from Lauren Dimes. Mills was counted for the assist, which gave her two points on the day.

The snow showed no signs of slowing down, and if anything, it sped up. Sooner or later no one on the field could stay on their feet and players were throwing their bodies around in order to get some control of the ball.

Referees conversed on three separate occasions in the second half, once at the start, again a couple of minutes in,and then finally at the 71st minute the decision was made. The conditions were officially effecting the way of play and player safety was at stake.

“It’s their job for safety and I understand stopping the game. It’s their decision and I don’t agree with it but …” Matz said, letting his thought go unfinished.

The Minutewomen were outshot in their last home game 14-6. Babin finished with eight saves on the day while Hawks goalkeeper Grace Bendon had one.

UMass finishes up its season traveling to Dayton this Sunday for a 1 p.m. start.