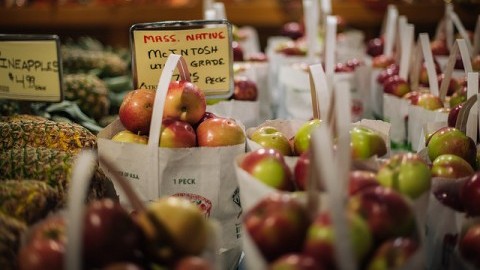 More than 100 cars full of apple-pickers flocked to Park Hill Orchard in Easthampton on Saturday, just in time to buy the last of this year’s crop, according to owner and operator Russell Braen. The apple harvest is wrapping up earlier than usual for Braen and other Massachusetts farmers, who faced varying degrees of difficulty during the growing season because of the drought and other environmental factors.

“The bottom line is yes, the drought has had an impact,” said University of Massachusetts extension professor Jon Clements in an email. “The drought is not the whole story, though.”

Clements explained that the drought and other factors have resulted in smaller apples this year, which may reduce the overall yield to about 50 percent of its average in Massachusetts.

In addition to dry conditions, an unusually large apple crop last year predetermined that this year’s crop would be smaller, and a hard freeze in early April damaged apple flowers and fruit buds as they were developing, he said.

The effects have not been evenly distributed, according to Clements. Some orchards have produced a nearly full crop, while others may have yielded only 10 percent of their average.

Atkins Farms Farm Manager Elly Vaughan said that though her 15-foot trees weathered the drought well, her apples are only 60-70 percent of their usual size.

“The fruit are coming in smaller and some varieties are coming in early,” she said. “Smaller fruit means less poundage and yield.”

Braen said that his Empire and Macoun apples have been as small as golf balls. He also said that the bees are to blame for some of his losses this year.

“They have no fluid during the drought, so they make holes in the apples and suck out the juice,” he explained. “That’s been the biggest economic loss.”

However, both Braen and Vaughan said that the drought has brought benefits as well as hardships. The grass grew slowly during the drought this summer, so farmers saved time and money on mowing.

“I’ve had to mow much less, and that’s not insignificant,” said Braen.

Vaughan said that she did not have to treat the apple trees for disease very often this year, since most of the fungal diseases that pose a threat are brought on by wet conditions.

In spite of these benefits, Vaughan would prefer a more typical growing season and full-sized apples.

“Some of these things saved us expenses, but I’d rather have more yield,” she said.

Clements echoed a similar sentiment. “We’re all looking forward to a good apple crop in 2017,” he said in an email.