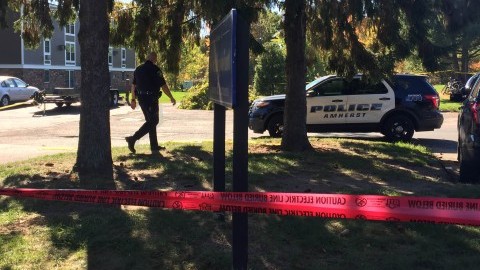 An arrest warrant for the person who shot two people, killing one of them, at Southpoint Apartments last Friday has been issued, according to an email sent by the Northwestern District Attorney’s office.

According to an email sent by Communications Director of the office, Mary Carey, the Amherst Police Department, in conjunction with the Massachusetts State Police Detectives Unit attached to the Northwestern District Attorney’s Office, obtained the arrest warrant Tuesday afternoon at the Eastern Hampshire District Court in Belchertown, Massachusetts.

“Although the issuance of an arrest warrant is a significant and positive development, this remains an active and ongoing investigation,” Northwestern District Attorney David E. Sullivan in the email.

The email said that the suspect’s name cannot be released until he is apprehended, because witness interviews and other procedures of the identification process are still occurring.

The email said local and state authorities are actively seeking the suspect, who is believed to no longer be in the Amherst area.

Carey’s email also said the surviving victim is continuing to recover in the UMass Medical Center at Worcester and is expected to be released in the near future.

Jose M. Rodriguez, a 31-year-old resident at Southpoint Apartments, was killed during the shooting.