Bon Iver brilliantly deconstructs itself on “22, A Million” 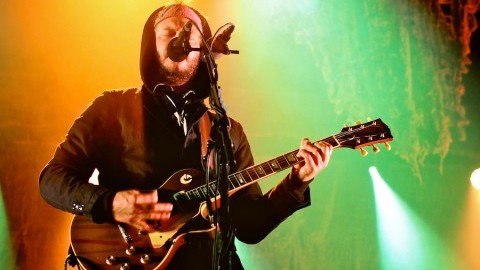 Before Bon Iver was a band, it was a story.

It was the legend of the band’s creative mastermind, Justin Vernon, retreating to a remote Wisconsin cabin to transcribe the wreckage wrought by a broken band and relationship. That backstory, romantic almost to the point of being cliché, was what breathed life into 2007’s “For Emma, Forever Ago,” a humble record with few aspirations other than to document a specific moment in time in Vernon’s life.

Of course, the album was a revelation, a haunting portrait of a prodigiously gifted singer/songwriter grappling with self-imposed isolation. Selling over 500,000 copies by 2013, “For Emma, Forever Ago,” was not just a commercial success but a cultural touchstone, one of the albums that began the years-long process of blurring the line between indie and mainstream music.

“Bon Iver, Bon Iver,” released in 2011, was designed to push back on all of this. Expanding his sound far beyond the claustrophobic confines of his debut, Vernon was no longer a singer/songwriter, alone with his guitar, but the conductor of a nine-piece ensemble.

A Rorschach inkblot of distant lyrics and stunning arrangements, “Bon Iver, Bon Iver” was almost reactionary in the way it directly contrasted “For Emma.” From a small, isolated cabin in the woods, Vernon had switched musical settings to a fantastical open world whose almost infinite empty space could be formed into whatever shape or atmosphere the listener had in their head at that moment.

Artistically, “Bon Iver, Bon Iver” was an extraordinary achievement. Only as an attempt to maybe stem the tide of Bon Iver’s growing commercial success was the album a failure. The band’s sophomore effort reached the 500,000 sales mark even faster than “For Emma,” and managed to net the band two Grammys.

Overwhelmed by his band’s meteoric rise, Vernon withdrew after touring behind “Bon Iver, Bon Iver,” and began the laborious creative process that would, years later, result in the band’s third album, “22, A Million.” The effects of fame on the reclusive Vernon dominate “22, A Million,” (released Sept. 30) a deeply anxious, splintered deconstruction of Bon Iver’s component musical parts.

Listening to it means resigning yourself to attempts at catching fleeting glimpses of Vernon’s familiar voice through the mountains of audio effects he places on it on almost every track, keeping up with songs through abrupt shifts in instrumentation and direction, all the while looking for deeper meaning in lyrics that are often opaque to the point of reading like it’s word salad.

If this all sounds like a bit of a pain, it certainly is at times. But, “22, A Million”’s moments of beautiful clarity—think the luminescent gospel of opener “22 (OVER S∞∞N)”—triumph over the headaches involved, like writing about an album filled with song titles like “10 d E A T h b R E a s T ⚄ ⚄” and “21 M◊◊N WATER.”

Anxiety and foreboding eat away at the album’s core from its first moments. The album’s first line is “it might be over soon,” while the relentless, mechanized charge of “10 d E A T h b R E a s T ⚄ ⚄” is constantly punctuated by disquieting, chopped-up vocals. Though you’d never know that the de-humanized interjection in the middle of the song’s first verse is Vernon saying “darling didn’t love right” in reverse unless you watched the song’s lyric video, it isn’t difficult to detect Vernon’s agitation.

Even the comparatively cathartic and uplifting “33 ‘GOD’” shows Vernon far from at ease with himself. “I’d be happy as hell, if you stayed for tea,” he gently admits in the first verse, while belting “staying at the Ace Hotel/If the calm would allow” in the song’s sledgehammer of a chorus.

These emotions spill over into the album’s arrangements, a choppy whirlpool of synthesizers, often distorted acoustic instruments and Vernon’s voice, almost never left to its own devices.

“29 #Strafford APTS,” with its folky acoustic riff, distant percussion and gorgeous piano flourishes, sounds at first like it could have been plucked straight from “Bon Iver, Bon Iver.” But towards the song’s conclusion, Vernon puts his vocals through a jarring series of effects, which crack his normally clear falsetto.

“21 M◊◊N WATER” is almost like a piece of ambient music. Resting on icy synths, clipped vocal and instrumental samples and ending with sax lines that would give pause to even the most seasoned free-jazz fan, it’s a microcosm of the album’s formula. “22, A Million” is not without the sort of serenity that made Bon Iver’s name, but finding it amidst the mechanized voices and musical misdirection this album constantly tosses your way is tantamount to exploring a thick jungle without a map.

In a way, it’s the same setting as the band gave us on “Bon Iver, Bon Iver,” with all of its infinite possibilities. “22, A Million” is just as much of a Rorschach inkblot as its predecessor, but the image the listener is presented with is far more complex and frustrating to comprehend. These quirks do not, however, make the end result any less rewarding.