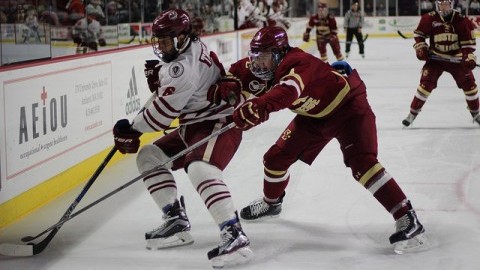 Dominic Trento defends the puck from BC. Caroline O'Connor/Daily Collegian)

A four-goal outburst in the third period from the Massachusetts hockey team was not enough to overcome a five-goal deficit entering the final 20 minutes of play.

Boston College outshot UMass 28-9 through the first two periods. All five of the Eagles’ power play chances came during the first 40 minutes of play, where Boston College set the tone and established a dominant offensive attack.

On those five power plays, both forwards Austin Cangelosi and Colin White found the back of the net, scoring on two of the 13 shots on goal the Eagles generated on the man advantage, compared to just nine on nine power play opportunities for the Minutemen.

Boston College opened play with a JD Dudek shorthanded goal. A turnover in the neutral zone led to an easy score for Dudek, who beat UMass goaltender Nic Renyard on a quick deke to find the back of the net.

Even strength goals for defensemen Jesper Mattila and forward Ryan Fitzgerald added on to a lead that the Eagles would not relinquish.

“They’re a high-skilled team, they play with pace,” Minutemen coach Greg Carvel said of the Eagles.

“If you give them time they’re going to make you pay, and they did that in the first two periods,” UMass defenseman Kurt Keats said. “Obviously we want to limit some of our turnovers. We thought we kind of shot ourselves in the foot with a couple turnovers and on a couple goals.”

Renyard did what he could in the UMass net to prevent Boston College from scoring more goals.

Coming off a 43-save performance at the TD Bank Sports Center Tuesday night in a 3-2 loss to Quinnipiac, Renyard made 29 saves against the Eagles—23 of them coming during the first 40 minutes of play.

To their credit, the Minutemen did fight to get themselves back in the game in the final period.

Goals from Austin Plevy, Patrick Lee, Ryan Badger and Keats (with Plevy and Badger’s scores coming on the power play) cut the Eagle deficit from to three and showed the character of a team trailing by five goals that had lost the previous night by three.

“We wanted to get something out of this weekend and have something to feel good about,” Carvel said. “I’m proud of the guys for scoring four goals in the third period. It was a character test for us to not shut down and keep playing and I thought the guys did a good job of that.”

Regardless of the resiliency UMass showed, it is pertinent to the success of the team to get off to better starts. Through the first six games of the season, the Minutemen have been outscored 10-4 in the first period of play. Digging themselves into an early hole is not an easy way to win hockey games, particular with the competition level featured in the Hockey East.

“I think we just have to come out harder and erase those turnovers because we’re only going to keep playing better teams,” he said.