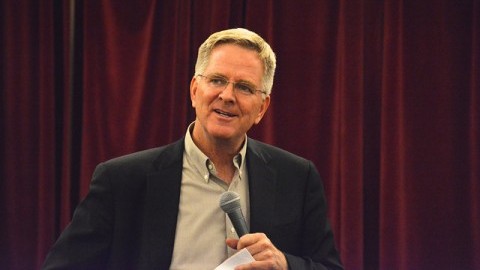 “High is a place, and I like to go there sometimes,” said author and television personality Rick Steves at the “Yes on Question 4” event at the Mullins Center Tuesday night. He spoke about drug policy reform and this November’s ballot Question 4 at the event organized by the University of Massachusetts’ Cannabis Reform Coalition (CRC).

Question 4 would legalize recreational marijuana for individuals who are at least 21 years old. Citizens of Massachusetts, Maine, Arizona, Arkansas, Florida and Nevada will be voting on similar questions.

“This is a national crusade,” said Steves when speaking of the federal prohibition that is imposed on the use of marijuana for recreational purposes.

“This is not a pro-pot thing in my mind. I acknowledge marijuana is a drug, and it is not healthy,” said Steves. “It is scary. It is a drug. What we got to do is take the scariness out of it. Talk about it in not a pro-pot way, but in a policy way.”

“The most dangerous thing about marijuana is that it is illegal,” claimed Steves.

He talked about the racial issues and double standards associated with the legality of marijuana.

“There have been no honest attempts to enforce [the law] consistently without two different standards,” he said.

“Marijuana is a handy way to disenfranchise black people so they can’t vote,” added Steves, using Florida as an example. Florida restricts people convicted of non-violent felonies, such as drug crimes, from participating in the elections.

“If [police] actively arrested everyone who smoked in Massachusetts then it would be a less interesting place. They won’t do that but that’s what they must do to consistently enforce this law,” he said.

Steves also addressed the many counter-arguments against the legalization of marijuana such as it being a gateway drug to other hard drugs.

“People buy marijuana from dealers who can introduce something more dangerous to them,” said Steves, adding that legalizing marijuana would mean that people will have to purchase it from state regulated stores.

Steves talked against the belief that legalizing marijuana would lead to over usage of the drug, especially amongst young people.

“Marijuana is easier to get than alcohol in so many states. However, legalized states say that it is harder to find marijuana,” said Steves. “Once you take the illegality out of it, it becomes less sexy.”

Steves discussed the benefits of legalizing marijuana such as increased tax revenue to support important public projects and the diversion of law enforcement toward more radical crimes.

Steves encouraged everyone eligible to vote in the upcoming elections to legalize marijuana.

“Turnout is important. This year is a beautiful year from a political point of view because of the presidential elections,” he said.

Nick Marino, president of CRC and a junior majoring in political communications, said the group expects to hold similar events after the elections end in December.

“The large adult turnout at this event really goes to show that stigmas [about marijuana] aren’t true,” he said. “The media likes to portray smokers as lazy teens who do not go to school, but this is not about kids. This is an adult issue for adults.”

Sam Ayer, a freshmen neurological psychology major, encourages all to vote as well.

“[The event] was really informative. A lot of perspectives about a lot of states were brought up, and it is interesting to see that there are weed skis and spas just across the border in Colorado,” said Ayer.

Editor’s Note: An earlier version of this article has been updated to be more specific about the referendums in other states.