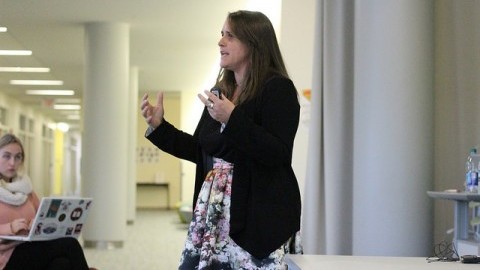 On Tuesday, Claire Wardle gave a talk at the Integrative Learning Center about the use of social media in broadcasting the refugee crisis. Wardle was here for the “Social Science Matters Speaker Series: Perspectives on Migration” event promoted by the College of Social and Behavioral Science.

Wardle is currently a faculty member of the Tow Center for Digital Journalism at Columbia University. Her knowledge of the refugee crisis comes from her work for United Nations High Commissioner for Refugees (UNHCR) in Geneva as a Senior Social Media Officer.

“How do you get people to care when some of these photos are too upsetting for people to see?” she said.

Wardle addressed the efforts taken by the UNHCR in trying to get their message broadcasted to the world about the refugee crisis that is taking place in the Middle East.

“So much of this is technology that allows refugees to have their own voices,” she said.

Through Facebook, Twitter and Instagram the UNHCR is striving to get the refugees’ stories told. Social media also allows the UNHCR to access the ongoing conversations online about refugee issues. This also gives the public more access to information about the crisis not always available to them.

“How do you take statistics that people can’t get their head around and humanize them?” she asked. One mission of the UNHCR was to produce media that would get the public talking about the information being shown to them in a way that would make it relatable to them.

One media form that the UNHCR utilized was videos that they could post to their Facebook. A video that was popular this summer was “#TeamRefugees: Champions against all odds” which promoted the 10 refugees who would compete in the 2016 Rio Olympics.

“You have to think about what will people share? If people just say ‘aww,’ you didn’t do your job,” Wardle said. She detailed the struggles that came with trying to get the word out about what was happening in the Middle East through social media. “Shares” are what helped to promote their cause.

Through social media, UNHCR was able to produce media that would gain the attention of the public and also major news corporations, like BBC, which would help to get the content into more households.

“The work she did was very timely and as she was saying two years ago, there was not as much awareness,” said Emily West, an associate professor of communications at UMass and a friend of Wardle’s, after the presentation.

“I kept seeing what she was saying about media corporations, using Disney’s advocate money for non-profits to amplify messages,” said Sarah Lowe, who was an audience member who related her time as an ESL tutor for refugees back to the talk, and to the work she used to do at Disney.

Wardle also gave a talk earlier in the day called “Verification for Social Media and Eyewitness Media” in the ILC.

Mary Yates can be reached at [email protected]