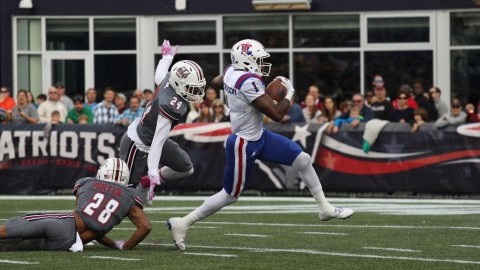 FOXBORO –– It was just another Saturday for the Massachusetts football team.

Amidst the occasional flashes of good, it was more of the same for UMass. Missed tackles, costly penalties, shanked field goals, turnovers and even more missed tackles all reared their ugly heads as the Minutemen dropped their fourth consecutive game, falling to Louisiana Tech 56-28 at Gillette Stadium.

“I think we can look at every game we’ve played and say ‘what could have been,’” tight end Adam Breneman said. “There was way too mistake from everyone – offense, defense and special teams – to win.”

Breneman added: “Louisiana Tech is a great football team, obviously really talented on offense and played really hard on defense. There were just way too many mistakes to be able to win the game.”

Bulldog wide receiver Carlos Henderson outscored the Minutemen himself. Henderson finished with 12 catches, 326 yards and five touchdowns as the 5-foot-11, 191-pound receiver torched the UMass secondary at will. La. Tech quarterback Ryan Higgins ended the afternoon 26-for-33 (78.8 percent) with 484 passing yards as all five of his touchdowns went to Henderson.

To put Henderson’s day in context, Andy Isabella leads UMass with five touchdowns on the season after scoring a late five-yard touchdown in the fourth quarter with the game well out of reach.

“They have a lot of talented players, but we made too many mistakes and missed too many tackles,” linebacker Steve Casali said, who finished with nine tackles, a force fumble and a fumble recovery. “If you make too many mistakes against a team like that, you’ll pay for it.”

UMass (1-6) was within one score of the Bulldogs (4-3, 2-1 Conference USA) less than three minutes into the second half when fullback John Robinson-Woodgett caught a 14-yard touchdown to make it 28-21 with 12:01 remaining in the third quarter.

But the Bulldogs countered with 28-unanswered points and a pair of touchdowns via Henderson, a strip-sack fumble recovery and a 71-yard touchdown run from Boston Scott to halt any chance of a Minutemen comeback.

“We weren’t good enough to beat those guys today,” UMass coach Mark Whipple said. “We’re giving our guys a chance. I thought our guys were ready to go. They were, and they kept their energy

After getting the ball down to the Bulldogs’ two-yard line one play into the second quarter, a holding penalty and sack forced UMass to attempt a 33-yard field goal. Mike Caggiano missed it wide-right.

Later again when the Minutemen got inside the La. Tech red zone, Whipple elected to use punter Logan Laurent in Caggiano’s place, but to no avail, as Laurent hooked his 36-yard attempt to the left.

“Well, you have to score touchdowns,” Whipple said when asked if the missed field goals impacted any offensive momentum. “You know, you have to make plays, kickers have to lick and receivers have to catch and quarterback has to throw to the right guys and we didn’t do enough of it.”

Despite finishing 29-for-40 with 268 yards, three touchdowns and an interception, quarterback Andrew Ford felt like he didn’t make enough plays to put the Minutemen in a position to win the game. Ford was sacked seven times by the Bulldogs defense.

“I’m not making enough plays to help this team win and that’s on me,” Ford said when asked about the UMass consistency. “We just have to watch the tape and learn from it and not make those same mistakes down the road.”

The road, however, doesn’t get any easier. Next weekend the Minutemen travel to Columbia, South Carolina for a matchup against the Gamecocks of the Southeastern Conference.

Will it be just another Saturday?