Defensive play will be critical for UMass hockey against No. 6 Quinnipiac 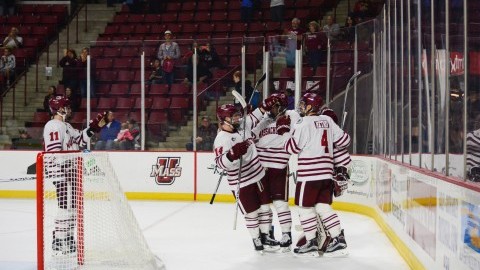 After opening the season with a trio of home games, the Massachusetts hockey team will travel to Hamden, Connecticut Tuesday night to battle the No. 6 team in the nation, Quinnipiac.

UMass (2-1) is coming off a solid 3-2 win against Army West Point and will head to the High Point Solutions Arena for a rare Tuesday night match against the Bobcats (4-2-1).

The Minutemen will face their toughest opponent to date at Quinnipiac and coach Greg Carvel believes their defensive play will be an important factor in determining the final outcome.

The Bobcats enter Tuesday night’s contest following a 3-0 shutout loss courtesy of Boston University, and will be returning to their home ice for the third time this year.

UMass, on the other hand, will be on the road for the first time this season and will be playing its final nonconference game before Hockey East for a while with conference games starting this Friday against New Hampshire.

In last six games, Quinnipiac has averaged just shy 30 shots per game (29.3), compared to the Minutemen’s 20.3 during the first three games of the season.

“Nobody likes to understand that there’s a difference between shots and scoring chances,” Carvel said. “I’ll give up 50 shots from the wall, I don’t care. Goalies love it because their save percentage goes up. (QU) does a good job, they throw a lot pucks to the net and they get to the net, that’s part of their game plan.”

Carvel added: “We’ve scored some nice goals making nice plays down the rush, we haven’t scored a lot of ugly, gritty goals and Quinnipiac does, and we need to learn from that and try to do the same.”

UMass has posted impressive numbers on the penalty-kill through its first three games with an 87.5 percentage (21-of-24 attempts), yet Carvel thinks there’s still room for improvement.

“Our penalty kill hasn’t been bad. We’re working on it. We worked on it before practice, we worked on it at the end,” Carvel said.

Two players that the Minutemen will surely be keeping an eye on are brothers Tim and Connor Clifton, who were third (43) and sixth (28) in team points last season as juniors. Now seniors, both are leaders on this year’s Bobcat squad as Connor is team captain and Tim is one of the assistant captains.

With that being said, Carvel admits their overall game-plan isn’t revolving around the two talented brothers.

“They’re just two of the twenty players on the ice,” Carvel said. “We’re not going into this game trying to focus on any single guy.”

“This team we’re going to play competes at a whole different level. It’s going to be a good learning experience for us.”

Ryan Ames can be reached at [email protected], and followed on Twitter @_RyanAmes.