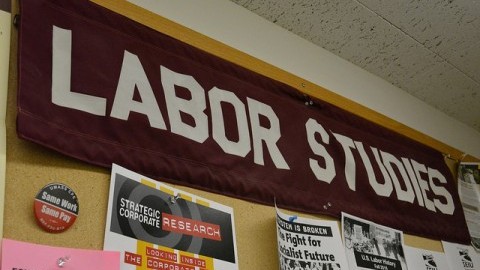 Editor’s Note: This article emerged from a collaboration with WMUA News. Their website can be visited at wmua.org, and their broadcast can be listened to live on 91.1 FM.

Since a letter written by the former University of Massachusetts Labor Center director describing cuts to the program by the University was published on several blogs in early Sept., the program has been surrounded by controversy over whether the University is trying to eliminate the program.

Since then a petition asking the University to protect the Labor Center by restoring teaching assistantships, externships and the employment of part-time faculty members has acquired 4,700 signatures on Change.org.

Eve Weinbaum, the former director whose letter described being ousted from her position, said that the Labor Center consistently had to work with declining resources during the decade she worked as the director there.

“There have been cuts kind of regularly over time,” she said.

Weinbaum’s account of the experiences she saw as director conflict with those of John Hird, the dean of the UMass College of Social and Behavioral Sciences.

Hird said that Weinbaum’s email inaccurately described demands by administrators to Weinbaum that the Labor Center functions as a revenue generator for other departments in the University.

“The University doesn’t require any units to be revenue generators,” Hird said. “The Labor Center has never been used to fund other departments.”

Hird also said that the University had not eliminated funding for the Labor Center.

“I think that email is full of misrepresentations and errors,” Hird said. “There’s many, many, many.”

Weinbaum said that she and other faculty members were explicitly told on multiple occasions that the Labor Center could only accept full paying graduate students.

“Our understanding was that master’s degree programs were to bring in revenue, especially Ph.D. programs,” Weinbaum said. “We were told explicitly we could only bring in full-paying students.”

Weinbaum said that when she first became the director, the Labor Center was able to promise first year students that their tuition would be covered by teaching assistantships, fellowships or externships paid by outside organizations.

“That’s especially important for us because many of our students are from working class families,” Weinbaum said.

Weinbaum added that graduates from the labor studies program at UMass would typically go on to work in jobs with low income, such as in organized labor and with immigrants’ rights groups.

Throughout Weinbaum’s tenure as director, the amount of teaching assistantships offered to students was gradually reduced to three by 2016, before being eliminated in the past year, in addition to the externships previously offered being made unavailable.

“From our perspective, that was a major cut in graduate student support,” she said.

Pat Greenfield, who was the Labor Center’s director from 1990 to 1997, said that while the term revenue generator was not used during that time period, administrators did view the program as not bringing in enough tuition to justify its costs.

Greenfield said that people at UMass often looked at the Labor Center as a part of the budget that could be cut.

“What constantly was missed is the outsized impact this program had in the state and nationally,” said Greenfield.

Greenfield said the Labor Center remained attractive because of its attraction to young people who were interested in working with social justice issues, its number of assistantships available and its 100 percent placement rate for graduates.

“The Labor Center has a significant reputation within the labor field,” Greenfield said. “As these folks make it into significant positions, they would reach back and recruit into the center.”

Ahmad said she was attracted to the Labor Center by the promise of being taught by people with hands-on experience in labor movements, and that the program emphasized labor over management, peaking her interest in it.

“I had heard over the years there were pressures placed on the Labor Center,” she said. “By the time I came there were only a few professors. It seemed like there was this general pressure.”

Hird explained that the Labor Center currently functions within the sociology department, and that due to a decreased enrollment in sociology this year four teaching assistantship positions were shifted from sociology to economics.

The impact of this resulted in the decreased number of teaching assistantships for students in the Labor Center.

“We need to shift T.A.s to where increasing enrollment is,” Hird said.

“We think there’s a potential to draw students into the master’s program,” said Hird, expressing enthusiasm over a four plus one program, which would allow students to complete a one-year master’s program after obtaining their undergraduate degree.

“It’s always been an integral part of the University and it will always continue to be,” he added.

Weinbaum, who said she proposed and helped plan the four plus one program, said she thought it is a terrific idea. Weinbaum said the Labor Center faculty are excited to work and described the Labor Center as a place where “students can get the background and analytic skills they need.”

“I think our future is actually really bright,” she said. “I think the resources we’re asking the University to restore are really minimal in the scheme of things.”