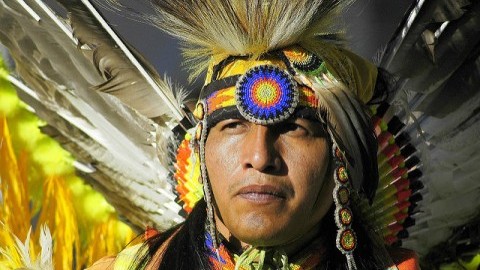 Well, here it is. Another bright and sunny Columbus Day weekend in the United States and, despite the fact that some cities such as Denver, Seattle and our own Amherst and Northampton are opting to rebrand the holiday as Indigenous Peoples Day, we are still not talking about real Native issues.

It is shocking to me that it has taken us until now to even begin to acknowledge the unimaginable insensitivity of having a national holiday named after a man who not only committed genocide and mass enslavement of indigenous peoples in South America, but who also paved the way for the unmitigated slaughter and both social and cultural destruction of native people in North America.

We are just now beginning to address the intrinsic problem of glorifying the destruction of these cultures, or at least glorifying those who perpetuated this destruction, in mainstream society. We are finally beginning to condemn the antiquated stereotypes of native peoples. And yet, despite this surface-level attention to the egregious ability of Americans to overlook the massacres, oppression and exploitation that is an integral part of our nation’s culture and very infrastructure, we are still doing the bare minimum to even acknowledge the first nation’s interests. What we are not talking about are the physical issues that Native American peoples struggle with every day, and we are discussing why this issues exist even less.

One of the most glaring issues in the Native community is that of police violence. Native peoples make up roughly one percent of the total U.S. population, and yet they account for almost two percent of all police killings. Mass incarceration also remains a problem in tribal nations, the worst offender being Hawaii which has an indigenous population of only 10 percent, yet indigenous people make up 39 percent of the incarcerated population.

In addition, there is a huge issue about jurisdiction in prosecuting crimes in tribal communities. Tribal governments are allowed to prosecute individuals in their tribes, but only up to a maximum of three years. Because of this limitation, more serious crimes are supposed to be prosecuted by the federal government. However, the government often declines to prosecute these cases without giving reason. This essentially means that violent criminals are often released, leading to more crime and less prosecution.

However, crime rates are not just high in these areas because Native peoples are committing them. They are also high because non-Native peoples can commit crimes on reservations and until recently could not be punished by the tribal government. In fact, the nonprofit group Mending the Sacred Hoop, citing 1990s data from the CDC and the Department of Justice, reports that “over 80 percent of violence experienced by Native American women is committed by persons not of the same race,” and Native women are “3.5 times more likely to be victims of sexual assault” than non-Native women. Additionally, Native children have a Post-Traumatic Stress Disorder rate of 22 percent, the same as that of Iraq war veterans, and the rate of suicide for 15 to 24-year-old Native youths is 3.5 times higher than the national average.

Poverty is, of course, also a huge issue. 27 percent of all self-identified American Indians and Alaska Natives live in poverty, compared to only 11.6 percent for white Americans.

Housing is an absolute disaster. 40 percent of Native Americans who live on reservations live in sub-standard housing, and 16 percent of homes have indoor plumbing. Native health care is also abysmal, due to the fact that the Indian Health Service is terribly underfunded.

America is a nation that was founded on the exploitation and killing of Indigenous Peoples. It is no secret. They have been shunted to undesirable land away from their tribes and families, and today the US government does not fund Native communities in the same way that it funds the rest of the country. They have actively devalued and erased Native culture and languages, and they continue to steal land and exploit these peoples.