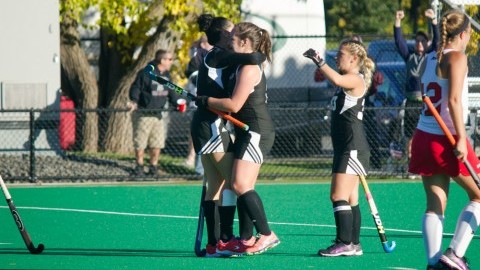 With eight seconds remaining in Friday’s game, the ball found Izzie Delario in front of the net where she knocked it in to give the Massachusetts field hockey team a thrilling 3-2 win over Davidson.

“(Delario) won a really critical recovery. She got back on the ball, won the ball and that enabled us to get back in the circle,” UMass coach Amy Robertson said. “(The goal) was huge and I was really happy that (Izzie and Sarah Hawkshaw) were able to come through to give us a win we really needed in the end.”

Delario and Hawkshaw have been offensive forces for the Minutewomen and that did not change against Davidson. After the Wildcats (3-12, 1-5 A-10) took a 1-0 lead 2:09 into the game on a controversial call, Hawkshaw took it upon herself to get the Minutewomen back in the game.

Thirty-eight seconds later, Hawkshaw split two Davidson defenders and got past another where she then ripped a back-handed shot in the top right corner of the net to even the score for UMass.

“Individually and as a team (Hawkshaw’s goal) was huge,” Delario said. “Sometimes it takes that one spark to be like we’re going to get this back and put it away to even it up.”

But Hawkshaw was not done there. A little less than seven minutes later, the junior midfielder found the net again. She possessed the ball after Nicole Miller’s pass was deflected and again Hawkshaw ripped a back-hand shot to give the Minutewomen their first lead of the game, 2-1.

Davidson’s Katherine English responded at the 14:07 mark of the first half when the Wildcats took advantage of a penalty corner. Courtney Byler and Hannah Fisher connected with English, who shot from the top of the circle just past the outstretched arms of UMass goalkeeper Emily Hazard.

The Minutewomen struggled to get anything else going on the offensive side after the pair of goals to open the game. They only had four shots in the second half and only three penalty corners in the entire game.

“I think we were a little off, I think you have to give credit to Davidson, they also helped to throw us off our game a bit today,” Robertson said. “Getting on the board early for them and then we answered, I thought that was great. It was a stalemate for a long time and we were just stifled with how to find a structure that would work today.”

Delario agreed with her coach’s assessment.

“We had a little bit of difficulty connecting through our lines,” Delario said. “We came out here with a big mindset with Davidson in conference and knowing we had to win. We came out with excessive energy and sometimes that’s not the best.”

UMass’ next contest is Sunday at 2 p.m. when Northeastern comes to Amherst for a nonconference battle on Senior Day. The Huskies are 7-7 on the season, but Robertson is looking forward to the competition.

“We take a lot of pride in playing teams within the state,” Robertson said. “It’s a really important game as well.”

Tyler Fiedler can be reached by email [email protected] and followed on Twitter @Tyler_Fiedler.