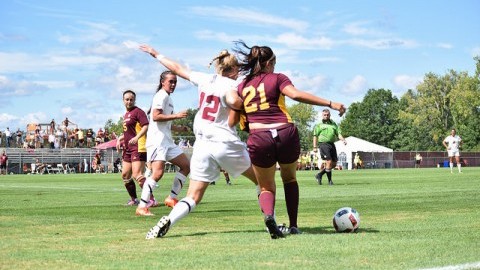 Luck has not been on the side of the Massachusetts women’s soccer team lately. It has failed to record a win in its last five games, while losing the last two in the final minutes of play.

On Thursday, UMass (2-6-1, 0-2-2 A-10) welcomes George Mason to Amherst in what will be a crucial game in the heart of the Minutewomen’s season.

The Patriots (8-3-0, 2-0-0 A-10) enter the matchup tied for first place in the Atlantic 10 conference with Duquesne, and are winners of their previous four games.

With four seniors on the roster, including captain Megan Burke, head coach Ed Matz is confident the leadership and experience they possess will help in bringing the rest of the team out of the rut they are currently in.

“We really didn’t have to say anything to our seniors,” Matz said. “They’re frustrated, they brought it in today before we even said anything to the team, and said ‘let’s just have a good practice, let’s make today’s practice one of our best ones.’”

“Sometimes they say things before we have to,” Matz added about his seniors.

Burke, who hasn’t quite found her stride yet tallying only one goal this season, does admit to feeling extra pressure at turbulent times like these.

“I think there is always pressure,” Burke said. “There’s definitely pressure on my back but I think the entire team feels it right now, so as a whole, I think we’ll get through this.”

“I’d rather lead by example,” Burke said about her leadership style. “I think a lot of girls will watch what you do as a leader and they’ll take after that, so I try to work hard and do my part so others will follow.”

Although the season hasn’t quite started the way Matz had hoped, he’s still proud of how his seniors have handled this adversity.

“The seniors are a good bunch of seniors,” Matz said. “They are committed to the program and to each other.”

“They’ve been good, some of them are coming back from injuries they sustained earlier on in their careers. They’re not 100 percent but they are giving 100 percent,” Matz added.

An all-out effort will be needed Thursday as George Mason is one of the hottest teams UMass will face this year, after the Patriots beat their respectable conference foes in Dayton and St. Bonaventure last week.

The Minutewomen faltered in the early part of their conference schedule as they lost back-to-back 1-0 games to La Salle and Richmond, respectively. Clearly, this game against George Mason will measure the rest of the Minutewomen’s season and will be critical in determining where they stand as an A-10 team.

This will also be the first home game for UMass since their 3-1 loss to Central Michigan on Sept. 11. Both Matz and Burke expressed their delight in returning home to familiar ground where they tend to perform better.

If nothing else succeeds Thursday, Burke highlights the comradery of the senior class as an advantage in and of itself.

“I think the senior class is really close,” Burke said. “Altogether I think each and every one of the seniors is a leader in their own way. Some vocal, some not, again some lead by example some don’t.”

“When we all combine and we’re all together, I think we can lead this team in the right direction.”