Mingle talks about the unsuspecting side of air pollution 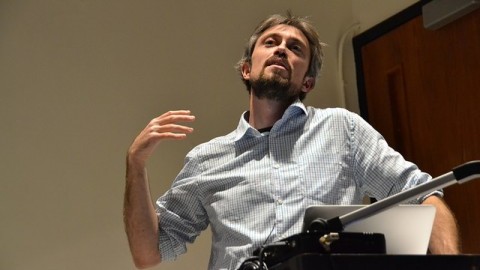 Jonathan Mingle, writer and author of “Fire and Ice: Soot, Solidarity and Survival on the Roof of the World,” gave the David Dillon Memorial Lecture on Oct. 18 titled “Hearth Tales: How the Other Half of the World’s Households Live” about the largely overlooked source of air pollution: black carbon, or soot.

The David Dillon Memorial Lecture is an annual event held by the Department of Architecture at the University of Massachusetts. The lecture was given in front of a group of about 50 people in Herter Hall.

Mingle is the author of “Fire and Ice: Soot, Solidarity, and Survival on the Roof of the World” that was published in 2015.

Mingle discussed his trips to remote villages in North India in 2008, when he was doing undergraduate research focusing on how to build homes with clean fuel alternatives.

“I left that first visit really puzzled. I was puzzled by how these folks were going to build this village, pretty much on their own, kind of a boot-strap effort, with very little help from the government,” he said.

He observed that people in the Zanskar were building homes that were very conducive to producing large amounts of soot. Mingle explained that the women of the households would go out and collect dung and other sources for fueling their homes, and they did not have clean options.

“It’s about energy poverty. These are folks who don’t really have other good options…there’s an electric hot plate, there’s a basket full of dung and a bottle with kerosene, and they dip the dung in the kerosene to start a fire,” Mingle said.

At one point during the lecture, he referred to areas of the world in which soot and black carbon is largely impacting the quality of life as the “smoking section.” The slideshow Mingle presented alongside his lecture showed that over 40 percent of humanity lives in the “smoking section.” According to Mingle, this includes the billions of people lacking access to clean cooking, the billions without electricity, and the billion lighting homes with kerosene.

“It was eye opening. The scale of the situation is eye opening,” said Amherst resident Michael Williamson. “I thought [the talk] was excellent. I really thought that there was a lot of clarity in what he was trying to get at and I thought it had a nice combination of…a realizable innovation. And sometimes when something is innovative it is hard to get [at]…with small incremental steps, you can really make an impact.”

Joseph Krupczynski, an architecture professor at UMass, said “Just broadly, [I did have an] awareness of global warming and the effects of it. I didn’t know very much of the Tibetan context and what he was talking about…I didn’t know that a lot of the black carbon that he was talking about was produced by domestic sources, you hear a lot about it coming from industry.”