‘Multiple Maniacs’ roars back into theaters with new 4K restoration 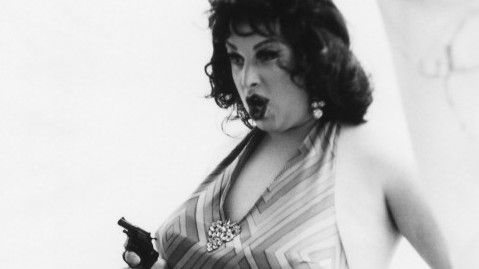 If you were to take the most downright filthy thing and clean it up, would it then become more beautiful? Film distributors Janus Films and the Criterion Collection surely considered this when choosing to restore John Waters’ infamous “celluloid atrocity,” “Multiple Maniacs.” Fans of the film and filmmaker had the opportunity to consider this unholy cleansing process for themselves last Friday at 9:45 p.m. during a one-time screening of the 4K restoration at Amherst Cinema.

The controversial films of director John Waters can reappear in your mind at any given time, regardless of how often you try to ignore them. When creating a film, Waters does not cater to an audiences predispositions before choosing what content to include within it. Rather, he exploits that which was considered to be obscene or inappropriate during the film’s conception. He then uses these taboo topics as a tool to blunt the audience’s sensitivity to things that shouldn’t be disapproved of in the first place.

If Waters’ films exist for their own selves, one might wonder how investing time into them could be beneficial. Have you ever held a great fear, and known that this fear was only as real as your inability to confront it? Then, upon finally confronting this thing, realized that it was never so bad, maybe even glorious?

Those reluctant to view Waters’ films should practice a similar act of confrontation. It is undoubtedly right to fear the images that will appear before you. However, in doing so, the viewer’s cultural pallet can be opened up to images and ideas that they have never experienced before.

Looking into the small budgets of films such as “Multiple Maniacs” can shed light on the methods waters uses to create such radical cinema. The film cost Waters only $5,000 to make and this was considered more of an extravagance than an artistic confinement.  Instead of lavish sets, the beauty of the body and Baltimore’s rugged streets were all Waters needed to create his own kind of special effects.

We look at our own bodies as the vessels that contain our own essential selves. But how often do we instead look at ourselves as works of art? To Waters, supposedly grotesque acts like defecation, urination and salivation are rather a poetic articulation of the self. He also feels that our most private sexual modesties are merely silly confinements laid out by a society too prude enough to understand that all humans are just animals.

John Waters is the definitive underground indie filmmaker. He was a young free-spirited man, roaming around the streets of Baltimore with his best friends beside him and his film camera in hand. Pointing its lens around at the supposed outcasts of the city depths, Waters connected to millions of other degenerates throughout the country in a happy unison.

Before the puke-worthy urges of sodomy were explored in the feces-filled frenzy of Pier Paolo Pasolini’s “Salò, or the 120 Days of Sodom” and before David Lynch confronted all of our subconscious fears in his nighttime epic “Eraserhead,” there was John Waters. Waters’ characters had been willingly eating feces since day one and his films have always been around to explore our deepest fears.

However, similar to other greatly misunderstood controversial things, Waters’ films (including “Multiple Maniacs”) were banned throughout the world. Unsurprisingly, this film used some of its negative reviews as a form of advertisement.

Janus Films and the folks at the Criterion Collection have done “Multiple Maniacs” a large justice with this restoration. The film, which many may not have considered in a critical light, is now being recognized for the landmark exploitation film that it is. Waters’ work can now be discovered and cherished by a budding generation of filthy and beautiful degenerates.

William Plotnick can be reached at [email protected]