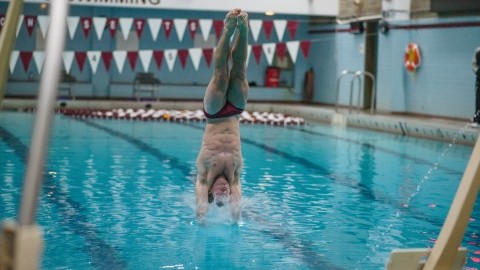 It was another busy weekend for the Massachusetts athletic program with men’s swimming and diving earning its first win of the season, while the Minutewomen tennis team ended its fall season at the ITA regionals.

In addition to the Massachusetts Daily Collegian’s coverage, here’s anything you might have missed:

The UMass men’s swimming and diving team picked up its first win of the season Saturday against Boston University, topping the Terriers 165-135 at the BU Aquatic Center.

UMass has a full week off before a tri-meet against Ivy-League opponents Brown and Yale Nov. 5 in Providence.

Minutewomen round out fall schedule

The UMass tennis team finished its fall schedule competing at the ITA regionals over the weekend.

Brittany Collens led the Minutewomen with an appearance in the Round of 32, where she fell in straight sets to Penn’s Kana Daniel. Collens won her Round of 64 match against Stony Brook in three sets (4-6, 6-4, 6-4).

Janja Kovacevic, Ruth Crawford, Ana Yrazusta and Anna Woosley also all advanced to Saturday’s Round of 64, as UMass had a program-high five members compete Saturday.

The Minutewomen are off until Jan. 28 when they host Quinnipiac at home.

Although it’s cliché, especially for a team that is no longer eligible to participate in a bowl game, Saturday’s game against Wagner for the UMass football team (1-7) is a “must-win” for the longevity of the program in the Football Bowl Subdivision (FBS) level.

Saturday’s game against the Seahawks marks only the second time the Minutemen have played a Football Championship Subdivision (FCS) team since making the jump to FBS in 2012. Charley Molnar-led UMass fell to Maine in the Minutemen’s home opener 24-14 Sept. 7, 2013 with former quarterback Mike Wegzyn under center.

After competing deep into the second half against three Southern Conference opponents in Florida, Mississippi Sate and South Carolina – on paper – the Minutemen shouldn’t have much difficulties on either side of the ball against Wagner. But as UMass fans are already well aware, nothing is ever predictable for the Minutemen.

The Seahawks (4-3, 2-1 Northeast Conference) have played one other FBS team this season, a 42-10 loss to Boston College earlier this year on Sept. 24.

Kickoff from McGuirk Stadium is at noon.

UMass hockey coach Greg Carvel has gone on the record saying he’s not necessarily judging the success of his first year solely based on wins and losses.

Tuesday’s contest against No. 6 Quinnipiac will be a good test for the Minutemen (2-1-0) to gauge its progression against a top-tier team in college hockey, similar to the level competition they will see in the gauntlet of the Hockey East Association schedule.

The Bobcats (4-2-1), who are the defending Eastern Collegiate Athletic champions, have played six games against HEA teams this season, with two each against Northeastern and Maine with individual matchups with Connecticut and Boston University.