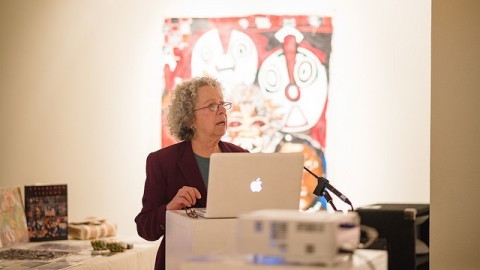 In an exhibition of prisoners’ art, author, artist and educator Phyllis Kornfeld showed artworks from prisoners before associate professor Chris Tinson discussed incarceration in the United States on Oct. 13 at the Augusta Savage Gallery.

“Once you tap into (creative energy) and you open the floodgate, it has its own energy,” Kornfeld said. “A person doesn’t have to sit down and think ‘what should I draw now’ because this energy is self-propelling.”

The Augusta Savage gallery in the New Africa House building displayed 12 paintings and sketches from prisoners. A table also displayed envelope art, sketches, a copy of Kornfeld’s book “Cellblock Visions,” and a pair of baby shoes made from ramen noodle wrappers.

Kornfeld spent 33 years conducting art courses from county jails to maximum security prisons, beginning in three Oklahoma state penitentiaries. She was hired to hold art courses for prisoners regardless of prior art experience. She is also the author of “Cellblock Visions,” which features paintings and sculptures made from the prisoners who Kornfeld worked with throughout her career.

Quoting the warden of Joseph Harp Correctional Center at the time she was hired, Kornfeld said, “Look, when a man has made art, he walks straighter, he’s cleaner, he says good morning to people,’” Kornfeld said to the audience of about 30 members.

Kornfeld’s presentation consisted of a slideshow exhibiting drawings and paintings from prisoners of mens’ and womens’ prisons that she had worked in. Alongside the slideshow she presented commentary, anecdotes and quotes from prisoners.

Some illustrations depicted scenes of from childhoods in which prisoners would endure an abusive father. Others expressed remorse, joy, struggles with substance abuse, spiritually and religious connections, along with some self-portraits. One artwork from a sex offender depicted the alienation he received from his inmates.

“(Correctional officers) think we’re less than they are,” Kornfeld said, quoting an inmate. “They get surprised when they see the work. They see us in a different light. They say, ‘Hey, you got talent.’”

Tinson described himself as a prison abolitionist. For Tinson, this means analyzing the place of prisons in modern society and its functions of control. He also actively opposes new prisons, advocates for lowering the number of prisoners in existing facilities, and hopes to seek methods to prevent further incarceration.

One of the organizations that Tinson highlighted is the Californians United for a Responsible Budget (CURB), which examines the state budget for correction and policing, and discusses the reduction of prisoners and prisons. Another organization is Critical Resistance, an advocacy group also based in California that seeks to end the prison industrial complex.

Tinson talked about prison strikes occurring across the nation in recent years, including one currently ongoing nationwide. One strike occurred in 2013 in California, in which 30,000 prisoners participated. The prisoners issued a list of demands to the California Department of Corrections and Rehabilitation asking for better conditions.

“Those demands may seem a lot to the Department of Corrections, but to the prisoners themselves, they asked for basic respect,” Tinson said. “Time for recreation, respect for their nutrition and their bodily health, their spiritual practices, things that we tend to take for granted.”

“I thought that the art really humanized the thoughts of incarcerated individuals,” said Jason Ahuja, a third year Hampshire Arabic Studies student. “I think it speaks a lot to a community that has been through a lot of struggle and can manifest colorful, not only literally but figuratively, art.”