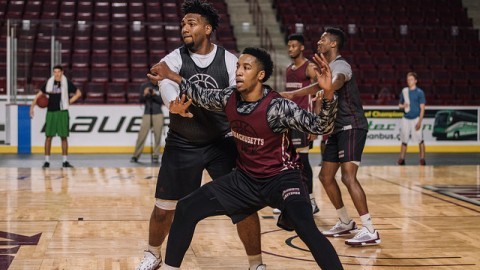 Malik Hines’ freshman season came to an abrupt halt when he was diagnosed with a broken foot in mid January.

With his foot still wrapped up, the 6-foot-10, 240-pound forward is back to practicing with the Massachusetts men’s basketball team and is slated to play a key role in UMass’ frontcourt.

Hines says that his foot is not 100 percent healthy yet, but he expects it to be by the time UMass opens up its season on Nov. 11 against UMass Lowell.

Following his disappointing freshman season, Hines wants to put helping the team in front of his personal achievements.

“At this point, it’s not even about me, it’s about the team,” Hines said after Saturday’s practice. “We did not have the seasons we were supposed to have the last couple of years. So at this point, individual achievements are not so much the matter of me right now, it’s more so what can I do for the team.”

Hines appeared in 16 games and averaged 10 minutes per game, picking up a total of 17 points and 38 rebounds before his injury. Following the injury, Hines said that UMass coach Derek Kellogg did not want the big man to focus on the past.

“Just move forward, don’t dwell on the past,” Hinds said, “[To] move forward and just work and continue to be who I am, and do what I came here to do.”

Along with sophomore center Rashaan Holloway, Hines is expected to be one of the big men up front doing the dirty work for UMass.

“Defending and rebounding,” Hines expressed as his primary role. “Just being that inside player is something we’ve been lacking since Cady [Lalanne] left, in my opinion. Having that trust in our teammates that we got their back. We’re the last line of defense at all times, so that’s it.”

Being healthy enough to practice has allowed Hines to work with and guard against Holloway, the biggest man on the team who stands 6-feet-11, 335 pounds.

“If he could be more dominant, that can help all of us and me as well,” Hines said. “By me having to guard him everyday in practice, it would make it much easier for me to guard other people in games.”

Kellogg thinks Hines is looking much more athletic now and that has allowed him to be physically tested more in practice.

“You know now he looks more athletic and the great thing is he’s getting pushed now,” Kellogg said. “You got Rashaan, and then there is Chris [Baldwin], Brison [Gresham], whoever else might fall into that category. I think that’s good for these guys to get pushed after practicing hard every day.”

The Minutemen were no strangers to injury last season and Kellogg thinks that Hines’ nagging foot injury put him back more than any other player.

“He was one of the guys that I think took the biggest step back with injuries last year because he was doing really well early and then he just looked un-athletic at times; he looked like he was struggling to keep up,” Kellogg said. “And then after the season, he basically explained that he was hurt all year, with the broken foot and what not.”

Kellogg expressed that if a player is hurt he’d rather see them rest than play through the injury, something that Hines did last year.

“I think with Malik one of the reasons he didn’t practice quite as much or play was because of his nagging injuries,” Kellogg said. “They deal with the trainer and if they’re hurt they sit. There is no wiggle room on that.”