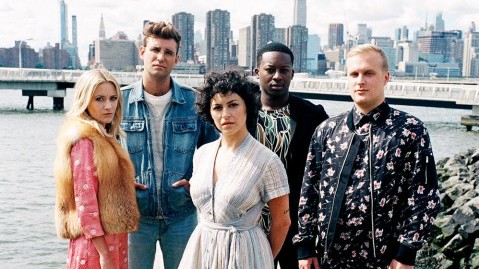 A self-published poet goes missing in Brooklyn, but she’s not the only 20-something who’s lost. That’s the hook behind “Search Party,” the upcoming dark comedy series from TBS whose pilot screened Friday night in Herter Hall.

With promotional posters riffing on classic “Nancy Drew” book covers and a healthy pinch of millennial satire, “Search Party” offers an excitingly fresh blend of styles and genres. The series focuses on a group of friends ensnared in an ominous mystery after they learn a former college acquaintance suddenly flew the coop.

Bliss and Rogers have been collaborating since they first met in the graduate film program at NYU’s Tisch School of the Arts. “Fort Tilden,” their thesis film about two roommates struggling to get to the beach, won the grand jury prize for narrative feature at the 2014 South by Southwest Film Festival. They’ve also written for “Wet Hot American Summer: First Day of Camp,” the Netflix series co-created by Michael Showalter, their teacher at NYU.

The duo spent roughly three months writing the first episode for “Search Party” after landing on its central mystery-comedy premise. Showalter introduced Bliss and Rogers to Jax Media, which produced the pilot. TBS bought their pitch and ordered the show’s 10-episode first season.

In an interview with The Massachusetts Daily Collegian, Bliss and Rogers discussed their creative process and the development of the show’s unique blend of tones.

“I think we were aiming for a balance,” Bliss said. “Moment by moment you figure out what feels right… knowing that one type of darkness isn’t right for this show, but a different type is.”

Bliss pointed out that a script evolves through collaboration between cast and crew, with everyone contributing great ideas that help the show progress. She also identified the “through line” connecting “Fort Tilden” and “Search Party.”

“Both take place in New York, in a world of people who are trying to impress each other.”

The two described their motivations in crafting the characters of “Search Party,” emphasizing the desire to juxtapose starkly different people.

“We liked the idea that [Dory] had this existential quest to find meaning in life, and that she wasn’t satisfied with just the superficial trappings of life,” Rogers said. “It felt good to surround her with people in contrast to that… Even though they have creative fields, what excites Elliott and Portia are the superficial elements of a creative lifestyle.”

He also noted, “Sometimes people operating on the surface often are the most confident because they’re not grappling with anything internally,” and that “putting Dory in opposition with a world that she doesn’t feel totally identified with” felt like a good place to start.

Rogers and Bliss admitted that some inspiration for the more affected characters in “Search Party” came from real-life frustrations.

“I think also we just know a lot of entitled creative people and there’s something very fun about writing that personality type,” Rogers said.

“[Portia and Elliott] are just trying to self-promote,” Bliss added. “Who they are projecting themselves to the world is different than who they are internally and their struggles. It’s just very like people we know.”

Bliss said some of the characters’ shallow exteriors stems from their insecurity and lack of validation, the need to satisfy a hole that won’t be filled in the way they expect. She explained her and Rogers’ intention to try to make viewers sympathize with characters that are initially challenging to love.

“You know exactly what this person is going to say because their character is so well-defined, and it’s so fun to make jokes for them,” Bliss said. “I like to keep our characters super specific.”

“Writing on different shows make you learn how to feel more empowered with story more than anything,” Rogers added. “You can’t be precious with story. You have to be open and flexible to changing pieces around because it’s going to change inevitably so much by the end.”

Bliss and Rogers, who each hold a master of fine arts in film, made a brief aside to explain the specific choice to make the show’s missing person have an MFA in poetry.

“If you listen carefully in the pilot, she is missing right as she was self-publishing her own book of poems.” Rogers said. “I think it was just funny to think of the most innocent fawn that could go missing—like an unachieved dreamer, a dreamer who still had something to show the world that was taken away.”

“And this is dark and mean, but thinking how those news reports go, they always try to paint the person as … an awesome person,” Bliss added. “And the best that they can say is ‘Her dream of self-publishing…’ That’s not really anyone’s [dream]. No one wants to self-publish. They want to be published.”

That kind of subtlety provides a lot of the charm in “Search Party.” In its goofier and broodier moments, the show focuses on character relationships illustrated through intimate and peculiar situations. Vibrant personalities populate the slickly filmed urban setting, often simultaneously leading to humor and intrigue.

TBS will air the complete first season of “Search Party” from Nov. 21 to Nov. 25, with two episodes playing back to back each night from 11 p.m. to midnight. Rogers said even though he and Bliss didn’t originally write the show with that schedule in mind, the marathon release format accommodates serialized drama.

“It’s good for our type of show,” Rogers said.

As they look ahead to the show’s premiere, Bliss and Rogers expressed what they felt most passionate about while bringing “Search Party” together.

“I love the writing process. I love creating stuff,” Bliss said. “It’s also super hard when you get stuck… but originating the ideas is really exciting and fun.”

She added: “Directing is also awesome, but so hard on your body… I thought I would miss it when it was over and the next day I was like, ‘I don’t miss it at all,’ even though I do love it in the moment. I am just very happy to get up at a normal hour and be able to make myself breakfast. And then editing is… nerve-wracking at first because you’re like, ‘What does it look like?’ and then shaping that is also really satisfying.”

“I love working with special people,” Rogers said. “Every step through there’s someone you connect with and share a moment with and that always breeds the most creativity, finding people that you can sync up with.”

Nathan Frontiero can be reached at [email protected] and followed on Twitter @nathanfrontiero.