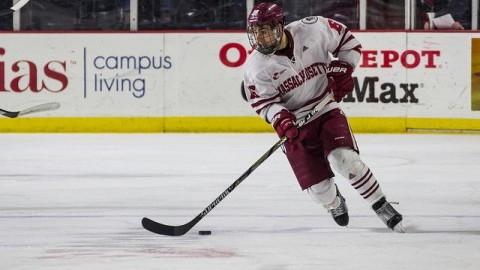 Following the first weekend of the season against Colorado College, Massachusetts hockey senior captain Steven Iacobellis has played 105 games in a UMass uniform. In that time, he’s accumulated 24 goals and 43 assists for a total of 67 points—scoring his first of the season in the second game against the Tigers.

Iacobellis, who is going into his second season as team captain, will play a major role in the transition to the Greg Carvel era for the Minutemen. The new UMass coach recognizes what kind of leadership he has at his disposal for this rebuilding process.

“I knew he was captain as a junior, which is a pretty strong statement,” Carvel said. “You don’t really see that often. I came in thinking we’ve got some good leadership and he’s someone I can lean on and buy in to what we are selling and he’s done that.”

Carvel added, “He’s a quiet leader, you know what you are going to get from him every night and he plays hard.”

Back when Carvel first introduced himself to the team, he and Iacobellis also took time to talk with each other separately afterward and were able to make their first

“I don’t remember too much of the conversation,” Carvel said. “But it was similar to most of the conversations we have. We just needed more accountability and more structure and I think (Iacobellis) along with the rest of the team were yearning for that kind of culture.”

“My first impression was that he’s a serious guy,” Iacobellis said. “But also very personable and can have a lot of fun at the same time, and he obviously has a lot of experience in the game and is someone that everyone here can look up to. He expects a lot out the guys. You can sense that in him right a way, and you want to work for him.”

From junior league to the Hockey East

The journey from Point Coquitlam, B.C. to Amherst, Mass. really jump-started for Iacobellis at the age of 17. He left home to begin his playing career in the British Columbia Hockey League (BCHL), which is a Junior “A” hockey league in western Canada.

Iacobellis spent his first season with the Penticton Vees, and lived with a billet family—a family that offers housing to Junior League hockey players—five hours away from his home.

“It’s different learning how to be away from home at 17,” Iacobellis said. “It was tough leaving home for the first time, but also at the same time it was really exciting.”

Following his first season with Penticton, the now 18-year-old Iacobellis was traded to the Cowichan Valley Capitals before being traded again the following season to Salmon Arm Silverbacks for his final year in juniors. He would finish his BCHL career playing in 147 games,  totaling 106 points (37 goals and 69 assists).

His impressive offensive production was enough to capture the attention of the Minutemen and their-then coach, John Micheletto. However, while in Penticton Iacobellis was initially committed to go to elsewhere.

“I was originally committed to go to Nebraska. but it fell through for various reasons,” Iacobellis said. “I knew another player in Penticton that was committed to UMass, Eric Filiou. I never heard of UMass before that.”

Three-quarters of the way through his final season in the BCHL, Iacobellis had the chance to visit and ultimately fell in love with the University. He quickly committed, just one month after initial talks with the Minutemen.

He also took the time to research both the school and the Hockey East conference, which offers marque opponents with some of the richest history in all of college hockey.

It’s fair to say that Iacobellis’ career opened with a bang at UMass. His very first career game came against then-ranked No. 19 Boston University on the road, and on a third-period power play he scored his first ever career goal in Agganis Arena.

“It was pretty cool, I’ve still got the puck and ticket from that game because one of my buddies was in attendance,” Iacobellis said. “ I don’t remember too much of that game. I don’t want to say I blacked out in the middle of it, but it was kind of overwhelming and to think ‘wow that just happened.’”

That goal was the first of 11 for the season for Iacobellis to go along with 10 assists for a total of 21 points and was named the team’s Rookie of the Year after playing in all 34 games.

He then followed a strong freshman season with eight goals in his sophomore year, including 16 assistants to go along with his eight goals.

His performance and character on and off the ice earned praise and recognition from his teammates as they decided to make him team captain as junior, which is a rarity in the college hockey world.

“It was a team vote, and it was nice of the guys to give me that title,” Iacobellis said. “There are so many guys on this team that could be captain or wearing letters, and those guys have helped me get here. It means a lot.”

Iacobellis did see a slight dip in offensive production last year as captain as he scored a total of 21 points and just four goals with a career-high of 17 assists.  This was also the final year under Micheletto, the coach who recruited him.

Iacobellis is now gearing up for his final act as a member of the Minutemen, and it will be under a whole new system run by the newly-hired Carvel.

Expectations from the outside looking in are not particularly high for UMass, but the focus this season will largely be internal for Carvel, and by extension, Iacobellis. The team as a whole will focus more on itself, rather than worrying extensively about its opponents.

The goals for Iacobellis this season have been set at a high level, but are also largely intangible.

“We’ve asked him to act in a way that even though he’s only going to be under this staff for one year, he makes an impact that he can always look back on and say ‘I played an important role in building the culture here,’” Carvel said.

“Just as a team, I’m hoping to really build on the past and leave this place better than when I got here,” Iacobellis said. “Also, to be someone that the younger guys can look up to and call upon in the future, and I want this place to be something that I can come back to and be proud of, and I think I will.”

Nicholas Souza can be reached at [email protected] and followed at @nicksouza27.