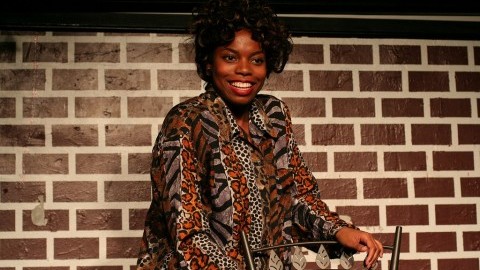 Sasheer Zamata is a comedian, actress, writer and current cast member of “Saturday Night Live.” She will be performing stand-up at the Iron Horse Music Hall in Northampton next Tuesday.

Zamata, full name Sasheer Zamata Moore, was born and raised in Indianapolis. Her parents, who were big “Star Trek” fans, named her after the crystalline substance from the show called “Tamen Sasheer.”

She graduated with a Bachelor of Arts from the University of Virginia, where she first began performing as a comedian. During her time there, she became a founding member of the school’s long-form improv group, Amuse Bouche.

Since she moved to New York City in 2009, Zamata has regularly performed with the Upright Citizens Brigade, a legendary improv group that has featured a virtual laundry list of America’s most famous comedians over the last two decades.

Zamata also co-starred in the ABC hidden camera series “Primetime: Would You Fall for That?” in addition to small television roles on shows like “Inside Amy Schumer” and “Totally Biased with W. Kamau Bell.” Some of her stand-up and impersonations can also be found on YouTube.

Zamata performs several impressions regularly on “Saturday Night Live.” Some of her best-known impressions include Michelle Obama, Beyoncé, Rihanna, Lenny Kravitz and Nicki Minaj, among many others. She has been a cast member on SNL since its 39th season in 2014.

Her addition to the cast of SNL came amidst criticism for the show’s lack of diversity among the cast members. Zamata was the first black woman cast on the show since Maya Rudolph’s departure from the show in 2007.

In 2014, Zamata was listed in Cosmopolitan’s “13 Funny Women to Watch,” as well as Time Out New York’s “Top 10 Funniest Women in NYC.” Throughout her career to date, she has performed stand-up comedy at the likes of Bonnaroo, SXSW, New York Comedy Festival, Woodstock Comedy Festival and the Great American Comedy Festival.

Last year, Zamata was appointed as a celebrity ambassador to ACLU (American Civil Liberties Union) for women’s rights. As an ambassador, she works to combat gender inequality and discrimination in employment, education, healthcare and other sectors.

Zamata has a few projects in the works for the near future. She is slated to appear in a few upcoming films, including the Jo Dillard film “Sleight,” and “Yoga Hosers,” the newest film from legendary director Kevin Smith.

Zamata is still relatively young and is gaining popularity on SNL. Through this show, and her performances across the country, she has been widening her audience, marking herself as one of America’s brightest up-and-coming comedians.

Fellow comedian Matteo Lane will open for Zamata Tuesday night at the Iron Horse. The show starts at 7 p.m. Tickets start at $18, and can be bought through nbotickets.com.