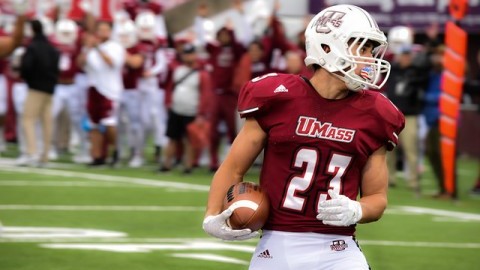 When taking a quick glance up and down the Massachusetts football team’s roster, there isn’t much that sticks out about 5-foot-9, 186-pound wide receiver Andy Isabella.

In person, he’s one of the most humble and quiet members of the Minutemen, and reverts almost any praise shed on him to working hard, how he carries himself and his work ethic.

At the halfway point of the season for UMass (1-5), Isabella, a sophomore, has emerged as the Minutemen’s top receiver leading the team in both receiving yards (385) and touchdowns (four), and is tied for first with 28 receptions. But what’s even more impressive is the fact he came out of high school as a running back, and didn’t spend much time working on receiver routes and hand drills before coming to UMass.

When asked if in August’s preseason camp or during the offseason he ever envisioned himself to be the team’s top receiver, Isabella never saw it coming himself.

“I really don’t think so,” Isabella said. “I definitely saw myself playing a lot more and I’ve just been working my butt off every day. I guess hard work really does pay off, so I’m just going to see where it goes.”

UMass coach Mark Whipple, on the other hand, knew right from the start Isabella had the potential to be a key cog in the Minutemen’s offensive machine.

“From camp, yeah,” Whipple said. “Maybe not the first two days before Jalen [Williams] got hurt. But he’s just come on and he’s been solid.”

In the past two weeks alone, Isabella has accumulated three touchdown passes. Last Friday against Old Dominion, Isabella had an 11-yard touchdown reception in the third quarter to make it a one-possession game. Two weeks ago against Tulane, he had a pair of 12-yard touchdowns in the first four minutes of contest.

“He’s done a real good job,” Whipple said. “He’s a competitor and is just carrying himself with a lot more confidence – kind of like, ‘get me the ball.”’

For quarterback Andrew Ford – who’s thrown him all four of his touchdowns – it’s been Isabella’s timing and precision that has led him to become such a prominent member of the offense, and one of his most reliable targets.

As the back-half of the season starts this Saturday when the Minutemen host Louisiana Tech at Gillette Stadium, Isabella expects teams are going to continue to mark where he is on offense at all times.

So far, Isabella says he’s been noticing more and more teams move their cornerbacks on him when he lines up in the slot, as his speed poses a mismatch nightmare for any linebacker.

“Yeah … it is kind of cool,” Isabella said when asked about the feeling of having opponents game plan for him. “It’s harder for me, but I like the challenge. I like going out there and competing every day.”

Isabella added: “You have to find different spots, and also work my routes better, which has always been a challenge for me. Coming in as a running back, I don’t think I’ve ever experienced running routes, so, I have to keep running my routes better and better.”

Despite the added attention, Ford isn’t worried about Isabella and his ability to find holes in opposing team’s defenses. The quarterback said despite Isabella’s size, he feels confident in putting the ball in the general facility of his top receiver to make a play for UMass.

“He doesn’t have the radius of a guy his size,” Ford said. “If you put it around him, he’s going to make the play – and that’s really helpful as a quarterback.

Ford added: “He’s also not afraid to go across the middle, and that’s tough for guys at this level. To see some of the strong safeties and linebackers at this level, in college football, and he has no fear. He just knows what he has to do and does his job, and it’s really awesome to have a target like that to throw to.”