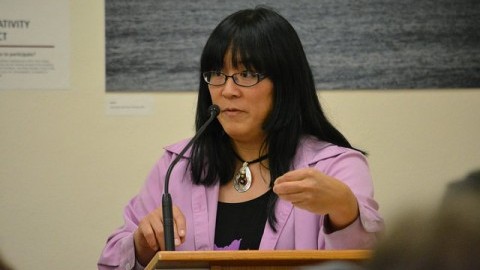 Author and activist Ryka Aoki met students and faculty at the University of Massachusetts on Thursday to discuss her experiences writing as a transgender woman of color and to bring to light challenges LGBTQ authors face in expressing their narratives.

Aoki said her goal was to generate dialogue among people to reflect upon the expectations readers and publishers have for queer writers, and how this affects the ways in which authors balance these preconceptions with their own personal narratives.

“To be a trans writer, especially a trans woman of color, I’m existing on so many different intersections. There are a lot of things to be responsible for and how to resolve those feelings and continue to weave a coherent story is a challenge I run into every day,” said Aoki. “The book that finally tells a trans woman’s personal story like it is is actually something that has been vetted, and altered, and shifted for publication.”

Aoki spoke of the disconnect between the needs of freedom of expression on behalf of the writer and the publisher’s desire to contort the personal story and perspective to suit its ideal construct of narrative.

Aoki said this creates dissonance within the mind of the writer because they are torn between obligation to the readers, publisher, and queer people as well as their own obligation to cultivate stories that are within their realm of creativity and pursuit of personal, honest narrative.

“It meant so much to [queer Japanese-Americans] that there was a Japanese-American queer writer they could point to and say ‘there’s someone like me.’ To hear someone say you helped them get through a terrible time, made them feel less lonely, or you saved their life, that’s really heavy,” said Aoki.

“ To be an author, especially a queer author of color, where simple visibility means so much, is to find yourself kind of quickly looked at as an authority and as a role model for whatever identities people see in you. How do you weigh that with your desire to write any darn thing you please?” she added.

Aoki said she is faced with accurately portraying a narrative desired by the readers and people of her community, as well as tackling the immense social justice issues faced by that same community.

Aoki explained that although she feels conflict between these responsibilities, she believes that the power of language and storytelling can unite people and propel a culture of understanding.

“Trans women of color are dying. We need to tell people that a trans life lost is a human life lost,” said Aoki. “Literature is a great humanizing force, and at times like this, when our population is under attack, is it even ethical not to use one’s skills to possibly change minds and hearts? What am I doing writing novels about fantasy stuff when there’s people dying?”

According to Aoki, one potential way to alleviate both the conflict of balancing narratives and the responsibility of utilizing writing and storytelling skills as a catalyst for social change is to expand on the availability of queer literature.

She compared the fluidity of queer writing with that of being queer itself, joining the two together to allow a more expansive, interrelated narrative.

“Writers as storytellers, objects of study, even intimate narrative partners and confidants, I think we should be allowed to be queer as well. Rather than worrying about what we write, we can be ourselves and produce work that can challenge and illuminate the experience of those who encounter it,” said Aoki.

The author concluded the event by reading excerpts from her books as well as some poetry. The audience listened intently and a roar of applause filled the room when she finished. Aoki spoke to students and faculty after her presentation.

Laura Briggs, professor and chair of women, gender, and sexuality studies at UMass, discussed the goal of organizing the event.

Justin Kilian, Gender Liberation UMass member and social thought and political economy and women, gender, and sexuality studies double major, spoke of both the long-term and short-term goals of the event.

“My goal, as part of a student activist group for trans students on campus, is to demonstrate that this is something that people care about. I want us to get a full-time tenure track position focusing on trans studies, specifically trans misogyny,” said Kilian. “That’s the long term goal; I think the short term goal is just having space for people to digest their own experiences and have that facilitated through a variety of perspectives that are offered.”

This event was the first of four in the Trans* Speaker Series organized by the University’s Women, Gender, Sexuality Studies in conjunction with Gender Liberation UMass, the College of Humanities and Fine Arts, the Office of the Provost, Gender Studies at Mount Holyoke College, and the Five College Women’s Studies Research Center.

Julia Riordan can be reached at [email protected]