Super Smash Brothers Club opens its doors to all players 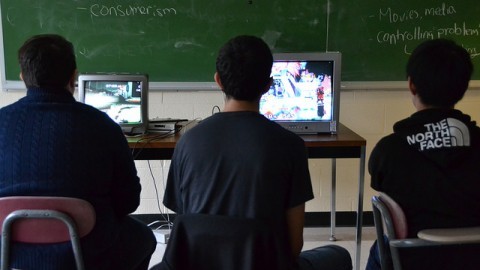 With over 350 people in its Facebook group and mailing list, SmashUMA has become a prominent scene for Super Smash Brothers players in the northeastern region. Club president Brendan Ryan, a junior operations information management and economics double major, says that people from around the New England area regularly visit SmashUMA for their weekly meetings.

The club makes it clear that they are open to players of all skill levels. The club is also a setting for newer players to gain experience and to improve their playing ability.

Jairo Salvador Lopez, a senior computer science major, acts as the club’s vice president. When he first visited the club in his sophomore year, he was greeted by a positive group of gamers who were willing to show new members the ropes.

“I really liked how people who knew so much were willing to teach me more, and I just got really interested,” said Lopez.

The positive and supportive people within SmashUMA keep players coming back every Thursday night. Senior computer systems engineer and pure math double major Alex Dunyak has been with the club since it was first founded. For Alex, the best part about SmashUMA is the friendships he has made in the club.

“It’s friendship. I’ve played this game probably more than a thousand hours at the very least. It’s fun to play with my friends and see that we’re all getting better. The fact that it has to be in person is a major driving factor that leads to developing friendships,” said Dunyak.

The video gaming community can be a male-dominated environment, so SmashUMA has made an effort to increase female membership by making the club a safe space for everyone. Jairo Lopez tries to make SmashUMA a comfortable environment by getting everyone involved.

“When we do get female members or attendees, I really try to get them involved. It’s really difficult to try to approach three or four people who are already sitting down to try to ask for a game, especially if you’re in an environment you don’t feel comfortable in,” said Lopez.

The club meets every Thursday night at 7:00 p.m. At their weekly meetings, players sit down at TVs to play Super Smash Brothers in both competitive and casual settings. The club regularly hosts tournaments around campus, the most recent events being held at Butterfield and HackUmass at the Integrative Learning Center.

SmashUMA can be followed on Facebook and Campus Pulse.

Alexander Jin can be reached at [email protected]