The NFL is too lenient on abusers 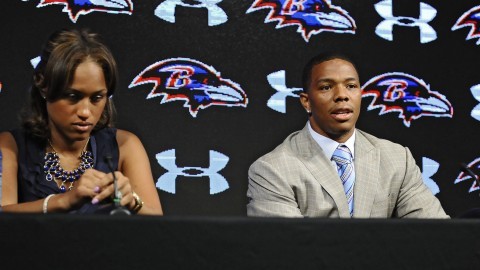 Ravens running back Ray Rice, right, and his wife Janay made statements to the news media May 5, 2014, at the Under Armour Performance Center in Owings Mills, Md, regarding his assault charge for knocking her unconscious in a New Jersey casino. On Monday, Sept. 9, 2014, Rice was let go from the Baltimore Ravens after a video surfaced from TMZ showing the incident. (Kenneth K. Lam/Baltimore Sun/MCT)

As a Pittsburgh Steelers fan, I was not in the least bit upset when Tom Brady was suspended for four games for his role in Deflategate. I felt that a suspension of some type was warranted, but as his suspension was announced, I felt that four games was not a fair punishment. And why did I think that? Because the National Football League has given suspensions that are far shorter for instances of domestic violence and drug use.

Josh Brown, a kicker for the New York Giants, was suspended for one game following an arrest due to a report of domestic violence. New information from this week shows that he is a repeat offender and there have been twenty instances of abuse to his wife. Brown wrote in a journal in 2014 admitting that he had abused his wife. The NFL was aware that Brown’s wife called security during the Pro Bowl because he drunkenly knocked on her hotel room door. His wife and their children had to be moved to a new hotel room where he did not know the location. This particular instance was known about by the NFL, but it was not why he was suspended.

Baltimore Ravens player Ray Rice knocked out his wife in an elevator. He was only suspended for two games. This prompted a newer, “harsher” policy.

Players who violate the substance abuse policy are suspended for four games. Pittsburgh’s Le’Veon Bell was suspended for an initial four games, which was appealed to three for marijuana possession and a charge of driving under the influence. While a DUI is a very serious offense, why is domestic abuse not being treated the same?

The NFL claims to have a “zero tolerance” policy when it comes to domestic violence. The punishment is a mandatory six-game suspension, but certain “factors” can influence if it is a higher or lower amount of suspension. I have a few qualms with that statement. First, if it is a “zero tolerance” policy, players should be suspended for a whole season or terminated, not given a new $4 million, 2-year contract like Brown.  Second, if this six-game suspension is mandatory, why aren’t NFL Commissioner Roger Goodell and Giants owner John Mara taking the allegations seriously? Mara is quoted saying “He (Brown) admitted to us he’d abused his wife in the past. What’s a little unclear is the extent of that.” That is my third point. If this policy is zero tolerance, why was Josh Brown signed to another contract? By allowing this player to continue playing even though he has a history of past abuse, the New York Giants are tolerating this kind of behavior. They are allowing it to happen again. If the NFL wants to end domestic violence issues with their players, then maybe they should be harsher and more consistent in their punishments. But it seems that domestic abuse is not at the top of the NFL’s concerns.

Instead, the NFL is worried about unsportsmanlike conduct and things that would undermine the game. I don’t think Brady’s deflating of footballs influenced which team won the game. But he has to sit out for four games. Meanwhile, we see men convicted of assault and battery playing after sitting out for a game or two.

We see the NFL focusing its nonprofit efforts fining players for the most miniscule things like celebration, colored cleats, and “taunting.” The NFL did not try to get the documents from the police concerning Brown’s investigation, nor did they do anything other than suspend him for one game until these new documents became public. Brown is currently on paid leave from the Giants as the NFL investigates.

Even without the new information, Brown was seen as having an incident of domestic abuse. It was not his first. He had an incident in college that left him suspended for one game. This was not new behavior. He was threatening to his wife and children at the Pro Bowl. And according to Roger Goodell’s new policy, the suspension for domestic abuse was six, not one. The other factors that he has to “factor in” is no excuse for the lack of suspension. And frankly, I find it insulting that the NFL decides to suspend and fine players for things that yes, may have to do with a football game, instead of the lives of their players and the people in their lives. Brady deserved to be punished, but not more than a man who has abused his wife. The NFL needs to change its policies surrounding domestic violence and I hope this is the last incident to steer the league in the right direction.