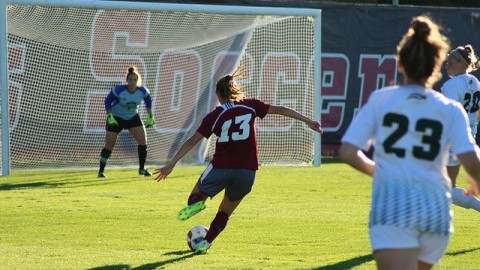 Coming off a busy weekend of traveling the East Coast, the University of Massachusetts women’s soccer team prepares for three straight home games before finishing their regular season in Dayton, Ohio.

UMass (2-9-2, 0-5-1 Atlantic 10) played a total of three overtimes this past weekend, taking a hard loss from a 100th minute goal against Davidson and then settling for a tie after two hard-fought extra periods against Rhode Island.

On the other side of the field, Duquesne (9-4-2, 5-1-0 A10) suffered its first loss after a 6-game winning streak which dated back to Sep. 23. After going up two goals, Saint Joseph rallied back with three unanswered goals to secure the overtime win and hand the Dukes their first A-10 loss.

“These are obviously critical games that are coming up, against some very good teams,” Matz said. “Anything less than three points is going to be very difficult for us.”

Sophomore forward Katie O’Connor is Duquesne’s point leader this season, scoring six out of the team’s 29 goals to go along with seven assists.

In contrast, junior forward Gabriela Kenyon is still UMass’s lone multi-goal scorer with two goals on the season, but junior midfielder Jackie Miller became the fifth player to find the back of the net for the Minutewomen this season notching her first career goal this past Sunday.

The teams have faced four of the same opponents, but Duquesne has beaten all with the exception of Central Michigan.

Though the Minutewomen’s last win dates back to Sep. 3 against Maine, senior captain Alyssa Fratarcangeli is still pleased with how her team has been playing recently.

“At the beginning of every practice we’ve said we have nothing to lose; it’s do or die,” said Fratarcangeli.

The midfielder emphasized the team’s need to work on finishing but believes that starting each game with an unyielding intensity is the key to pulling out a win.

“We need to go out as strong as we can every time, right from the start, and try to get an early lead.”

Despite the Minutewomen’s apparent struggle to pull out a win, the team has proven themselves able to fight tooth and nail until the very last minute of each game.

UMass has faced a total of five overtime games this season, three of which headed into a second overtime, each ending in a tie or loss.

“Losses are losses but when you lose games in sudden death, it’s an even harder way to lose games,” said Matz.

On three separate occasions, the Minutewomen were subjected to play 20 extra minutes of game time, which is almost an extra half of intense play.

Matz expressed his concern for the toll that it takes on his players, both physically and psychologically. He gave the team a day off earlier in the week and is still resting players who play substantial amounts of minutes even more the following practice.

But his captain knows this is nothing new for her team.

“We’ve been there so many times, even in my four years here,” Fratarcangeli said. “It’s something we’re very used to and know how to handle.”

“We don’t even want to have to get to that point, we want to finish it, no overtime. And if it does come to that, we need to be able to get the win and not a loss.”

UMass looks forward to welcoming Duquesne to Rudd Field this Thursday at 3:30 p.m.