UMass field hockey comes away with weekend split in Philadelphia 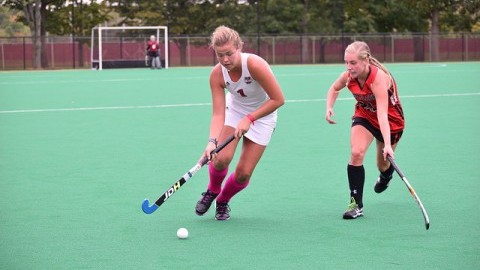 Hannah Farrell sweeps the ball from her opponent in a game against SFU at Gladchuck Field. Photo by Katherine Mayo/Daily Collegian)

Coming into a weekend road trip to Philadelphia, the Massachusetts field hockey team was hoping to come out with two wins and sitting atop the Atlantic-10 conference.

“We had two solid performances,” said UMass coach Amy Robertson. “We got really unlucky at St. Joes, but I’m very happy with how the team played overall. This was the most work we’ve put in in back to back games. The girls are very tough minded and they work together as a team.”

Early in their matchup with the Hawks, the Minutewomen put up 13 shots in the first half alone on St. Joes’ goalie Victoria Kammerinke, but the Hawks got on the board first in the 7th minute off the stick of Kerri Turk, who scored her eighth goal of the season.

UMass junior Sarah Hawkshaw tied the score at one in the 14th minute with her 10th goal of the season from the top of the arc, setting a new career high.

The Minutewomen scored again in the 22nd minute when senior defender Hannah Farrell scored off a penalty corner that was inserted by midfielder Celina Hocks.

The Hawks scored again in the 34th minute off another goal by Turk, but the score would stay deadlocked at two for the entire second half.

In the 65th minute and the score deadlocked at 2-2, Melanie Kreusch beat the Hawks defense and Kammerinke, but officials waved off the goal after it went wide, much to the dismay of UMass and its coaching staff.

St. Joes would go on to win after midfielder Pepa Serrano ended a 42-minute scoring drought – giving the Hawks the overtime victory.

“(The goal) came off a corner, it was a questionable call,” said junior forward Sarah Hawkshaw. “It came in off my left foot, then they shot it on the left side of the cage, it was a great shot.”

However, when they faced La Salle Sunday, the Minutewomen came out hoping to come back and learn from their mistakes Friday and turn it into a victory.

The Explorers got on the board first with a goal off a corner by forward Jess Hoffman – her third of the season – in the eighth minute. The Minutewomen, tied it up a minute later when Hawkshaw scored her 11th goal of the season off a pass from forward Nicole Miller.

The Minutewomen then scored three unanswered goals – all from different players. One by junior Celina Hocks in the 21st minute, her fourth of the season, one by senior Niki Miller in the 48th minute, her sixth, and one by junior Melanie Kreusch in the 42nd minute, also her sixth.

“I let the team do their own debrief, I didn’t talk to them after the game today, I let the team talk,” Robertson said. “I’m so proud of them, to be able come in a situation where you know that you have to have a good game, to know that you’re on a field that’s not your home field and try to come out and play your game.”

Up next the Minutewomen take on Lock Haven University at the Gladchuk Sports Complex in their final regular season game on Friday at 2 p.m.

Zander Manning can be reached at [email protected] and followed @ZMSportsReport