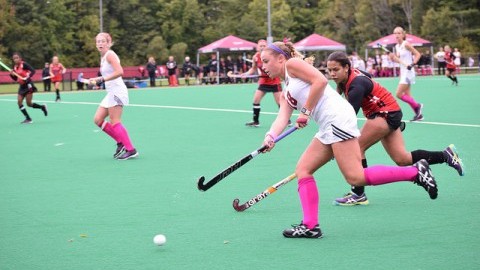 The Massachusetts field hockey team could not get enough stops as its comeback effort fell short losing 4-2 to Richmond Sunday.

Two late goals for the Spiders ended up being the difference in the game. Kelly Quinn of Richmond put the Spiders ahead 3-2 on a penalty corner at the 59:16 mark. Penalty corners were a major problem for the Minutewomen (7-6, 3-1 Atlantic 10) as UMass coach Amy Robertson was displeased with the team’s defensive effort.

“[Richmond] caught us ball-watching a couple times [when they scored],” Robertson said. “We were not covering the important areas of the field at times.”

Richmond (6-6, 4-2 A-10) took advantage of the Minutewomen as their speed was too much for UMass to handle. Emma Johansson added the fourth and final goal for the Spiders with seven minutes to play.

But the UMass offense did overcome a couple of early deficits.

Down 1-0 in the first ten minutes of the game, the Minutewomen offense responded. Anne Dijkstra scored her second goal of the season on a redirection in front of the net. Sarah Hawkshaw ripped a shot into the circle that Dijkstra tipped-in to tie the game at one.

“We possessed the ball really well at times and our offense is pretty threatening when that happens,” Robertson said. “Our midfielders played much better today than they have been.”

Dijkstra was one of the midfielders that stepped up for the Minutewomen offensively. However, moments later the Spiders took the lead once again. Hannah Loos put another ball past Emily Hazard just three minutes after Dijkstra knotted the game at one.

The back-and-forth affair did not stop there. Just under seven minutes went by before UMass struck again. This time it was Grace Horgan who tied the game for the Minutewomen. It was Horgan’s third goal of the season but her first in eight games.

Richmond’s defense was tight all game and the Minutewomen did not get many open opportunities. After Richmond went ahead for a third time, UMass failed to put anything together offensively.

“There were times on the offensive side when we tried to get through their sticks,” Robertson said. “Richmond contested everything and made us beat them on the outside which we were unable to do.”

UMass did not get many penalty-corner opportunities either, finishing the game with only five. On the other end, the Minutewomen allowed 11 penalty corners.

The loss was UMass’ first in conference play. The Minutewomen have struggled to maintain a winning streak this season, hanging around .500 for most of the year.

The weekend started off on a high-note for the Minutewomen as they shutout Virginia Commonwealth 2-0 on the road Friday.

Izzie Delario continued her strong play as she scored the first Minutewomen goal 51 seconds into the game. It was Delario’s team-leading seventh goal of the season.

“I felt like we had some good moments this weekend,” Robertson said. “And then we had moments that eliminate the good things we did. There is still a lot of work that needs to be done.”

Hawkshaw added the second goal of the game from the middle of the circle. Goalkeeper Emily Hazard converted her third shutout of the season.

The Minutewomen return to action Friday against A-10 rival Davidson at Gladchuk Sports Complex. The game is scheduled to begin at 3 p.m.