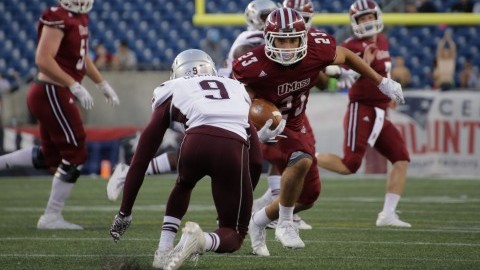 In a game moved up a day to avoid the effects of Hurricane Matthew, Old Dominion scored 10 points in the first quarter and would never give up the lead as the Massachusetts football team fell 36-16 to the Monarchs Friday night at Foreman Field at S.B. Ballard Stadium.

The Minutemen (1-5) were able to keep the game close for the first three quarters, even getting the game within a touchdown after quarterback Andrew Ford found Andy Isabella on an 11-yard touchdown pass midway through the third quarter, but from there on out nothing much was going on offensively for UMass.

The inconsistent play that has been the Minutemen’s Achilles heel came back to bite them again as two fourth quarter interceptions by Ford and the inability to move the ball resulted in just 4:23 of possession the quarter, which put the nail in the UMass coffin Friday night.

Defensively, the Minutemen struggled to slow down the Monarchs (4-2, 2-0 Conference USA) rushing attack, a problem they have been plagued by during the past few games as Old Dominion running back Jeremy Cox ran for season-high 162 yards on 24 carries. He accounted for two Monarchs touchdowns, one in the second quarter and the last score of the game in the fourth. Teammate Ray Lawry added 88 yards of his own on the ground, scoring touchdown with 32 seconds remaining in the third quarter to give them a 29-16 lead.

UMass running back Marquis Young countered well for the Minutemen. The sophomore rushed for a season-high 163 yards and added one of UMass’ two touchdowns in the game. With the performance, Young went over 500 rushing yards on the season.

Coming into Friday’s matchup, Minutemen coach Mark Whipple said he was planning on giving both Ford and Ross Comis time at quarterback on Friday. He stuck to his word, although Ford was responsible for 21 of the 33 UMass pass attempts on the day. Ford finished 11-for-21, throwing for 189 yards and a touchdown, along with the two interceptions. Comis, who started the game, went 3-for-7 for 12 yards and third-string quarterback Randall West got his first collegiate snaps under center as well, going 2-for-4 for 36 yards.

On the other side of the field, Old Dominion quarterback David Washington was solid throughout, throwing for 248 yards and a touchdown.

Steve Casali led UMass on defense with 11 tackles, along with returning a blocked PAT for 98 yards for a safety in the second quarter. Joe Previte also had a strong game for the Minutemen with 1.5 sacks and three tackles for a loss on the day.

UMass was without many of its prominent players as Shane Huber, Teddy Lowery, Khary Bailey-Smith, John Robinson-Woodgett and Elijah Wilkinson all missed Friday night’s game.

The Minutemen will look to right the ship next week when they take on Louisiana Tech at 3:30 p.m. at Gillette Stadium next Saturday.