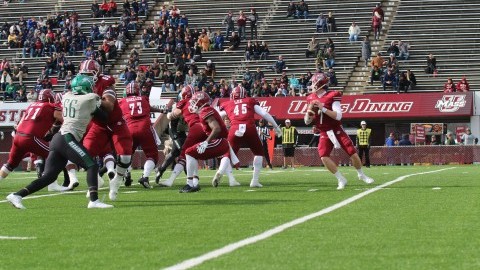 Quarterback Andrew Ford and former Cedar Cliff High School teammate Adam Breneman ensured that senior day at McGuirk Stadium would not end the way the previous five contests have for the Massachusetts football team – in a loss.

The lethal offensive combination gashed the Wagner defense from the opening kickoff to send the 8,468 in attendance Saturday at McGuirk Stadium home happy, with a 34-10 Minutemen (2-7) victory over the Seahawks (4-4, 2-1 North East Conference).

UMass totaled 507 yards of total offense in its final home game at McGuirk this season, with 355 of those courtesy of Ford’s throwing shoulder.

Ford threw for three passing touchdowns and ran in another. The Lackawanna Community College transfer hit Breneman twice in the first quarter then connected with a streaking Andy Isabella for a 55-yard score the following quarter.

Isabella made up for a would-be 80-yard touchdown at the beginning of the drive that was bobbled before falling incomplete. Isabella had beaten the Wagner defender who leapt to try and deflect the path of Ford’s throw.

“It was going to be a tough catch,” Ford said. “It was just one of those things where I knew he was going to make a big play again – it’s what he’s been doing all year. I never really thought of anything else but to get him the ball on that (touchdown) play. That play was designed for him and there was not a dip in confidence after that play. That would have been a really, really tough catch and he bounced back. It’s just one of those plays that happen throughout the course of a football game. I’m really proud of the way he bounced back.”

Isabella finished with 123 receiving yards on the day with eight receptions, but the sophomore was not the leading receiver on this day.

Breneman led the way with 138 yards and two touchdowns on eight receptions – one of which featured a highlight reel one-handed catch in the middle of the field that would aid the Minutemen in scoring their final touchdown of the game.

“He’s a big target, so it really helps me out always knowing where he is going to be especially across the middle of the field,” Ford said of his 6-foot-4-inch, 250-pound tight end. “When you’re scrambling on third downs, he’s a really big target and he makes plays for us.”

Running back Marquis Young left the game after the first quarter with an injury, giving sophomore running back Sekai Lindsay and freshman Bilal Ally extra reps that they took advantage of.

Lindsay rushed for 58 yards on 10 carries, including a crucial 22-yard gain to set up the second Breneman touchdown.

Ally rushed for 51 yards on six carries, with a 34-yard rush to put the Minutemen into Wagner territory before Ford scored a 16-yard rushing touchdown.

The UMass defense was stout in keeping the Seahawks off the scoreboard for nearly three quarters. The Minutemen limited the Wagner offense to just 11 first downs in giving up 362 yards of offense.

Freshman cornerback Isaiah Rodgers led the team with nine tackles and grabbed his first interception of his career on the first play from scrimmage in the third quarter.

“We had a good week of practice,” linebacker Steve Casali said. “That was the main thing and we carried it over today. The main thing was not missing tackles and I thought we did a good job of that today.”

The first UMass victory in five weeks comes as welcome respite for the long, three-week road trip that ends that 2016 football season for the Minutemen. An offensive outburst, albeit against an FCS opponent, gives UMass an added push toward the finish line.

“No matter who we are playing, we feel like we could put 500 yards of offense,” Breneman said. “With Andrew (Ford) leading us, the playmakers that we have, the offensive line, I think the confidence level in the offense is pretty high right now.”

The first stop on the final three-game stretch will be Troy, Alabama, as the Minutemen take on the Trojans. Kickoff at Veterans Memorial Stadium is set for 3:30 p.m.