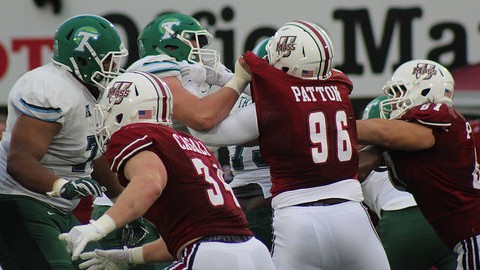 During the first half of the 2016 season, the Massachusetts football team has faced some of the best defenses in the nation. From the stout secondary of Florida to the strong linebacker core of Boston College, UMass has faced the best of the best in defensive fronts.

Saturday’s matchup against Louisiana Tech at Gillette Stadium provides the Minutemen (1-5) with a completely different kind of challenge. All eyes will be on the UMass defense as it tries to slow down one of the nation’s top offenses.

The Bulldogs rank seventh in the nation in total offense and are coming off a 55-point performance last week against Western Kentucky. La. Tech has scored more than 40 points on three separate occasions this season.

Minutemen tight end Adam Breneman knows the UMass offense will have to be at the top of its game if they want to compete with the Bulldogs Saturday.

“Their offense has been pretty well-documented as one of the best in the country, so we’re going to have put a lot of points on the board,” Breneman said. “Our offense has shown flashes of what we can do. You look at the start of the Tulane game, scoring twice in two minutes. We can move the ball down the field. We just have to cut down on the mistakes.”

A big reason for La. Tech’s success on offense has been the combination of quarterback Ryan Higgins and wide receiver Trent Taylor. Higgins ranks eighth in the Football Bowl Subdivision (FBS) in passing yards (1,869) and sixth in touchdown passes (17). Taylor ranks second in the FBS in receiving touchdowns (8), receptions (66) and receiving yards (861).

Minutemen coach Mark Whipple is well aware of the impact the two Bulldogs can have on any given game.

“Those guys are really good. [Ryan] Higgins is really accurate, athletic and he makes plays,” Whipple said. “They don’t really run him that much, but he just makes plays. His ball placement is really good and he probably has a stronger arm than it looks on tape.”

Whipple added: “The guys around him have a lot of skill. They have big guys that run, so we got to keep the ball in front of us and not give up big plays and tackle well in space.”

La. Tech’s defense has been a different case and has shown inconsistency throughout the first half of the year. The Bulldogs have seen games where they hold their opponent to a touchdown, like they did against Texas El Paso, but they have also had games where they have given up multiple scores, like the 52 points they surrendered last week against the Western Kentucky Hilltoppers.

Despite the opposition’s inconsistencies, UMass quarterback Andrew Ford is not going to take the Bulldogs defense lightly going into Saturday’s game.

“They’re a very talented defense from top to bottom,” Ford said. “They have a lot of depth. We don’t look too much at the scores. We just watch the tape and see that they have a lot of great playmakers all over the field.”

After losing three straight and five of their first six games, it would be easy for the Minutemen to pack it in and think about next year, but the team refuses to give up on this season.

“For us, this is the halfway point of the season. We’ve got six games left and we just got to take what we learned in the first six games and make sure we don’t make the same mistakes,” Ford said. “Each week is a new opportunity. Good or bad, whatever happens in the past you have to put it behind you.”

“We’re pretty good at gathering each other up and moving on,” Breneman added. “We’re looking at this as a new six-game season. We think we left every game on the field, we could have won in all five losses. We’re going to take it one week at a time and look at this as a fresh start for us.”

Kickoff is set for 3:30 p.m. at Gillette Stadium on Saturday.