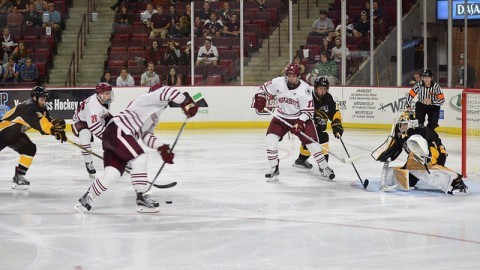 It has been two weeks since the Massachusetts hockey team dropped the puck on the 2016-17 season, beginning the Greg Carvel era at UMass.

The Minutemen split their season-opening series against Colorado College – a 3-0 victory on Oct. 7, followed by a 7-4 defeat the following night at Mullins Center.

UMass enters its season with plenty of question marks across the board, with youth and inexperience fogging much of the roster and even the coaching staff.

That uncertainty starts at the top of the pecking order, as Carvel enters his first season as coach of the Minutemen – returning to the university that earned him a master’s degree in sport management. The former St. Lawrence coach and the rest of his staff is ready to brace the challenges that this season presents.

“I’ll gauge this season by whether we can raise our standard of play every night,” Carvel said. “I’m not that worried about wins and losses right now. I’m looking for a team that plays the right way and earns the respect of their opponent every night.”

The way the current roster is constructed, the Minutemen feature eight freshmen to go along with the remaining returning members of the team, highlighted by the youth of goaltender Ryan Wischow, forward Jonny Lazarus and defensemen Shane Bear.

Carvel and the rest of the UMass coaching staff have yet to name a permanent starting goaltender for the season. The Minutemen, however, did decided they will ride the hot hand and whichever player performs the best consistently will get the nod between the pipes.

Wischow was the victor in the opening game against Colorado College – turning away all 31 of the Tigers’ shots. His effort on back-to-back nights was less than impressive, however, as he was chased from the game after allowing three goals in the first 7:15 of play.

Nic Renyard relieved Wischow and made 28 saves, while the lone goalie yet to see the ice this season, Alex Wakaluk, is an assistant captain. The job is still up for the taking if any one netminder can come in and win it throughout the course of the season.

“We want to give all three guys opportunities,” Carvel said before the start of the season. “It’s always great if one guy makes the decision for you. At this point I don’t think that’s the case.”

Iacobellis is hopeful he can aid the team in improving on its 8-24-4 record from a season ago, but knows they have a long way to go.

The defense will be led by Baxandall, veterans William Lagesson, Ivan Chukarov and Marc Hetnik, as well as freshmen defensemen Shane Bear, who is in no way hesitant to let one fire from the point.

Regardless of the personnel in the room and results the next few months present, the Minutemen are ready to make a concerted effort in making Carvel’s first season a success.

“I feel like the past was in the rearview mirror as soon as coach walked into that locker room,” Chukarov said. “We’re all geared up and ready for this season.”

“I think [Carvel’s] doing a great job and all the boys are on board with what he’s trying to lay out for us,” Trento added. “Obviously we’re still learning but that’s the good news. There’s always so much that we can keep getting better.”

“There are things I want these guys to accomplish and I think they will,” Carvel said. “It’s a good group of kids. They work hard. They really try to do what we ask. We just have to keep pushing.”