UMass hockey faces tough task in traveling to No. 6 Quinnipiac 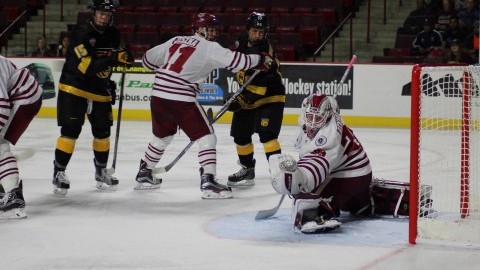 The first road test of the season is a daunting one for the Massachusetts hockey team.

The Quinnipiac Bobcats (4-2-1) are the sixth-ranked team in the nation coming into Tuesday’s contest, as it welcomes UMass (2-1-0) to the High Point Solutions Arena at TD Bank Sports Center in the first game outside Mullins Center this season for the Minutemen.

Coming off a 3-2 victory against Army West Point Friday night, UMass will look to continue to even-strength scoring opportunities. Penalty minutes have hurt the Minutemen’s efforts to play on level-ice, with one-third of the opponent goals coming during a man-advantage or greater.

“We need the game to be five-on-five because I think five-on-five we’re not bad,” UMass coach Greg Carvel said. “Our special teams, not surprisingly, have a long way to go. We’re working on it. We worked on it before practice, we worked on it at the end. As far as the number of penalties you’re going to take, I don’t think anybody can control that. It’s hard to tell even what a penalty is, which is frustrating.

Carvel added: “To me, (the power play) is definitely a glaring issue in our game right now.”

The Minutemen have killed 21-of-24 penalties given this season (87.5 percent), good for fifth in Hockey East and the 18 best in the country. The power play has converted on just 2-of-25 chances, with even-strength play being the strong suit of the UMass artillery.

One beneficiary of opposing penalty minutes is freshman Jonny Lazarus. The second-line winger has registered a power-play goal to go along with his team-leading four points, tied with his line mates Patrick Lee and Dominic Trento.

Tallying 12 of the team’s 30 points this season, all three players have active three-game point streaks heading into Tuesday’s game, with Trento and Lazarus both providing two assists in the Oct. 21 victory over the Black Knights.

“I think that line is scoring because they’re doing a lot off the (zone) entry,” Carvel said. “They’re scoring a lot off the rush. I think Lazarus has kind of been the key in all of it. Obviously Dominic (Trento) has a few assists but (Lazarus), as a freshman, has really showed poise with the puck to help create these rushes.

Carvel added: “He’s been a real nice surprise this year. He’s probably been the lynch pin to that line which is why they have scored quite a bit.”

For the first time this season, freshman goaltender Ryan Wischow will not start the game between the pipes. Rather, sophomore Nic Renyard will get the start on the road. With three games in five days, the schedule has helped dictate a rotation of goaltenders for the coming week, as New Hampshire and Boston College come to town for Friday and Saturday night matchups.

“Obviously more than one goalie is going to play,” Carvel said, giving the number of games on the coming docket. “We want to see what (Renyard) brings to the game from the start. Hopefully he plays well. Hopefully it’s still a tough decision because we have two goalies playing well instead of two goalies just being OK.”

Renyard relieved Wischow in the 7-4 loss in the back-end of consecutive games against Colorado College, allowing three goals in 52 minutes, 17 seconds while making 28 saves.

“(Renyard) hasn’t really had a fair chance,” Carvel said. “We gave (Wischow) the first game based on where the two goalies were at that time. With the shutout we gave him the start the next night. In retrospect, we probably should have given it to (Renyard). We had two weeks off and (Wischow) was a little bit ahead. Now we want to give (Renyard) a full game and see what he can do.”

The Bobcats enter Tuesday having lost their last contest 3-0 to Boston University. Quinnipiac leads the all-time matchup with the Minutemen with a 6-2-2 record, but despite reaching last season’s NCAA National Championship game, the Bobcats tied and then lost a 4-3 overtime affair to Carvel’s St. Lawrence squad in the regular season of the Eastern Collegiate Athletic Conference. That was one of just four losses on Quinnipiac’s schedule.

“You have to give the team a real solid gameplan,” Carvel said. “You can’t go in and hope for the best and just see what happens. If you don’t compete with them – that’s where they’re really good. They play at a good tempo and they really compete hard. That’s been our focus for the last couple of weeks. We’re trying to raise our compete (level) to a new level and we’ll have to raise it a couple notches against Quinnipiac.”