UMass hockey struggles with consistency in loss to UNH 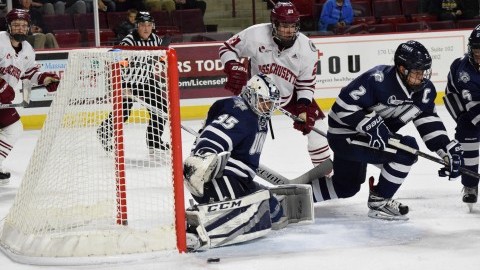 The Massachusetts hockey team opened Hockey East play in disappointing fashion on Friday night in a 4-1 loss to New Hampshire.

The Minutemen (2-3, 0-1 Hockey East Association) watched several scoring chances and momentum shifts come and go, as the hole they found themselves in got deeper. Friday’s game against the Wildcats (2-3, 1-0 HEA) seemed to be the hyde performance to Tuesday’s jeckell against No. 6 Quinnipiac as UMass failed to maintain any consistency.

“Obviously when you play the sixth ranked team in the country you’re mentally prepared for it,” Minutemen coach Greg Carvel said. “But we have to keep the same level of focus when you play a team that’s only won one game.”

UMass did have stretches where it looked as if it was on the verge of taking back control of the game. Down 2-0 during a 5-on-3 power play, freshman defenseman Shane Bear tallied the first and only goal of the night for the Minutemen to bring them within one.

UMass’ lone goal came during a 10-minute stretch where it managed to take control – featuring another strong showing from the fourth line of Luke McElhenie, Ryan Badger and Riley McDougall that continues to be the spark plug for the Minutemen offense.

“We like playing together,” Badger said. “We read off each other really well so we know where we’re going to be. It’s real easy when you expect guys to be there so you can get pucks going and win a few battles. “

UNH quickly squashed any momentum coming into the third period with a goal in the first minute to go up 3-1.

The issue of lack of scoring did not come from a lack of chances; in fact UMass took a season-high 27 shots and created an abundance of scoring opportunities. Players such as forwards Patrick Lee and Jonny Lazarus saw multiple chances to score throughout the game but either drifted wide or were saved by Wildcat goaltender Danny Tirone.

While several pucks either dibbled past the net or were deflected wide on what looked like the moment for the Minutemen to pull even, it wasn’t the main concern for Carvel.

The focus will be on consistency moving forward as it has been for Carvel and UMass so far this season. This loss will serve as another teaching moment for the first year head coach.

“That was my message to the team tonight, ‘how do you create energy how do you build momentum?’” Carvel said. “Goals are great but I tell these guys all the time goals come after you do two or three things really well and the same thing after you give up a goal it’s usually two or three mistakes. Everything builds and we have to learn how to build.”

The issue for the Minutemen may not be scoring, but generating the momentum necessary that leads to it. While UMass showed flashes of brilliance, and maybe a few inches one way or the other could have made those flashes enough to win Friday, the Minutemen will need to find both an identity and a rhythm if they wish to take the next step.

Nick Souza can be reached at [email protected] and followed on Twitter @nicksouza27.