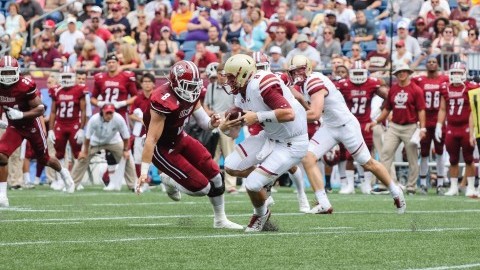 The Massachusetts football defense suffered arguably its most devastating loss of the season Tuesday after finding out inside linebacker Shane Huber will miss the remainder of the season with a knee injury.

“He’s gone for the year,” Whipple said. “He has an ACL [injury]. He played with it during the year and re-aggravated it.”

Huber was the Minutemen’s (1-5) “Mike” linebacker and most prominent member of their defense this season after finishing second on the team in tackles last year with 98.

“He’s our leader, he’s vocal. He’s the quarterback of the defense,” Whipple said.

Huber did not play in UMass’ last two games against Tulane and Old Dominion, and played sparingly in the Minutemen’s loss to Mississippi State on Sept. 24.

In the four games (three starts) that Huber played in, he accumulated 20 tackles (seven solo, 13 assisted), 2.5 tackles for losses and returned an interception 27 yards against the Bulldogs. Through six games, Huber has the lone interception for UMass.

“That’s the hardest thing about coaching,” Whipple said when asked about dealing with injuries. “When you get to this point in the year when you get injuries [and] you see guys get hurt.”

This isn’t the first knee injury to Huber’s career. The 6-foot-3, 237-pound linebacker missed the entire 2014 season after tearing both his ACL and medial collateral ligament (MCL) as a freshman on a routine punt against Northern Illinois on Nov. 2, 2013.

Whipple said that redshirt senior Vondell Langston and junior Colbert Calhoun are the likely candidates to fill the void left by Huber as inside linebacker. Whipple also said that he’s considering mixing and matching his defense this week against Louisiana Tech, and that Lucas Amato and Leon Flanagan Jr. could also be seeing snaps as part of the rotation.

“With Louisiana Tech so much more open, we are looking at some other guys too, especially with the amount they’ve thrown the past three weeks,” Whipple said. Bulldogs quarterback Ryan Higgins is quietly having one of the best seasons as a quarterback in college football, completing over 65-percent of his passes (142-for-216) and has thrown 17 touchdowns to just two interceptions.

As much as the Minutemen are going to miss Huber’s playmaking abilities on the field, the biggest loss that Whipple sees from the injury is the loss of leadership he brought both on and off the field, especially in the defensive huddle.

“I think the leadership at times lacked in the huddle,” Whipple said “When some of the younger guys are in there and making mistakes, that’s more of a bigger concern—the leadership.”

UMass could be missing another linebacker for Saturday’s game against Louisiana Tech, as the status of Teddy Lowery, who did not play against the Monarchs on Friday, is still up in the air.

With all of the absences in the Minutemen’s front seven, Whipple said that Steve Casali has emerged as the primary voice of their defense since Huber’s departure. Casali leads UMass with 54 tackles this season—the next closest is Da’Sean Downey with 35—in addition to his team-leading two fumble recoveries.