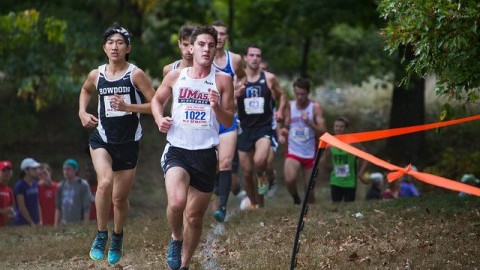 Franklin Park is a fast, grassy venue that plays to the strength of the Massachusetts men’s and women’s cross country teams, as each team finished in the top third of the competition at the New England Championships this past Saturday.

On the men’s side, senior Morgan Marlow took first for the Minutemen, while enjoying a top 15 finish, placing 15th with a time of 25:12 (5:04/mi) on the 8-kilometer course. This was Marlow’s second race as UMass’ number one runner, as this senior continues to run well during his final cross country season of his collegiate career.

The next four scores for the Minutemen all came in within one minute of Marlow. Senior Blake Croteau was the second Minuteman across the line with a time of 25:46, good for 48th place. Sophomore Mike Famiglietti captured 55th place with a 25:55 performance as UMass’ No. 3 runner. Freshman Kendall Westhoff enjoyed a UMass top-five finish in 64th with a time of 25:59, and John Burns rounded out the Minutemen’s scorers in 78th place at 26:09.

Overall, Leakey Kipkosgei of American International was the 2016 New England champion, running the course in just 24:21 (4:54/mi). Following Kipkosgei, Brown’s Matt Mahoney took second at 24:23, while Boston University’s Paul Luevano finished third with a time of 24:40. However, only the Bears appeared on the team podium, in second with 113 points. The Northeastern Huskies took the team title at 102 points and the Division III champion Massachusetts Institute of Technology finished third overall at 133 points.

At the women’s 5-kilometer race, redshirt freshman Mary Lavery finished 21st with a run of 18:26 (5:56/mi) and was the first Minutewomen across the finish line. Lavery has been showing a lot of promise as a redshirt freshman, and her success early in her UMass career can only indicate good things for the team later on.

Following Lavery, junior Colleen Sands was UMass’ No. 2 runner, crossing the line at 18:45 to claim 42nd. Senior Deirdre Martyn was third for the Minutewomen in 61st place with a time of 18:56. On her heels in 63rd was senior Christine Davis at 18:56, while freshman Taylor Blow rounded out the UMass top five in 85th with a time of 19:13.

The women’s New England champion was Stonehill’s Nicole Borofski with a time of 17:28 (5:37/mi). Borofski had a 15-second lead on the field, as the second place finisher was Jordan O’Dea of Northeastern at 17:43, who was closely followed by Harvard’s Elianna Shwayder with a 17:46 performance. Much like the men’s race, only of the individual top three was part of a top three team, as Shwayder’s Harvard Crimson took second with 137 points. The New Hampshire Wildcats cruised to a New England title with just 71 points, while the Vermont Catamounts took bronze at 152 points.

Both teams have their longest rest of the season to get refueled for the Atlantic 10 championships, one of the most anticipated meets of the season. The race will take place at Pole Green Park, in Mechanicsville, Virginia on Oct. 29.