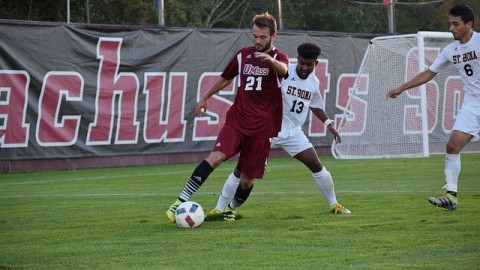 Through the first 75 percent of the Massachusetts men’s soccer match against St. Bonaventure on Wednesday afternoon, UMass appeared destined for another 0-0 game as neither the Minutemen nor

Then the magic happened.

In the 69th minute midfielder Henry Steinkamp found forward Kevin Boino making a run to the right post where Boino received the ball about five yards out from the net, before Boino beat the SBU goalkeeper with a shot to the far post, scoring the lone goal in a 1-0 UMass win.

In addition to the lone goal of the game, Boino also had the Minutemen’s best scoring chance of the first half when his shot banged off the left post in the 12th minute.

Boino has now found the back of the net three times against St. Bonaventure, as the sophomore also powered the Minutemen to a 2-0 victory over the Bonnies last year when he scored both goals.

“Just keep scoring against everyone else now,” UMass coach Fran O’Leary said with a laugh. “It was a terrific goal. Kevin did very well, particularly in the second half today. He led the line very well.”

O’Leary believed the team needed to take a simpler offensive approach in the second half.

“I think we just need to be a bit brighter, take a touch less,” O’Leary said. “We were taking three, four touches, we were a bit later than our passes, so we just needed to up the tempo, start playing one or two touch, up the tempo and the overall pace. I think we did that in the second half and threatened a few times before we actually scored.”

As has been the case often during the Minutemen’s improved run of play over the past six games, UMass played sound defense. The Minutemen limited good scoring chances for the Bonnies, who took the majority of their shots from outside the box. UMass goalkeeper Jorge Becerra played well in net, tallying seven saves.

The back four adapted well to the addition of midfielder Matthew Mooney, who played at left back, filling in for typical starter sophomore Konrad Gorich, who was injured in the A-10 opener against Dayton.

Mooney typically starts in the midfield for the Minutemen this season, but last year he spent time at left back, making it easy for the UMass defense to adapt to his presence.

“We’ve played together before, so it worked pretty well,” Mooney said about the communication between the four Minutemen defenders and Becerra. “They’re all confident I’m there, I’m confident that they’re there, so we work well together.”

The Minutemen have now held their opponent without a goal for three straight games, the first time UMass has achieved that feat since 2011.

“We pride ourselves on trying to get clean sheets every game,” Boino said. “We work hard for each other, it’s not just the back four and Jorge, it’s everyone as a team, pressing and working with each other, plugging holes. It’s a total team effort to get a clean sheet.”

The Minutemen now have a record of 4-1-1 in the past six games and it appears UMass has found its stride at the right time with conference play in full force.

The Minutemen travel to Davidson on Saturday for their next match. Opening kickoff is scheduled for 6 p.m.