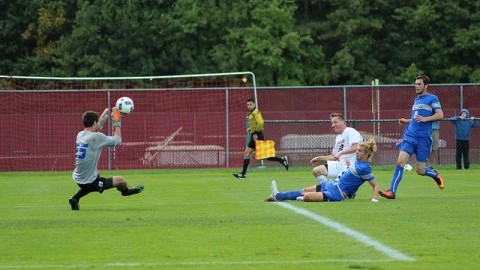 The Massachusetts men’s soccer team finished its non-conference schedule with a 1-0 win over Central Connecticut at Rudd Field Tuesday.

“I think that we’ve hardened, we are learning what you have to do to win a game,” UMass coach Fran O’Leary said. “I feel that our concentration levels are better and our decision-making is better.”

Tuesday’s only score came off the foot of midfielder Henry Steinkamp. The junior successfully made his way through the Blue Devils’ defense on the right side of the net and shot the ball from eight yards out passed the goalkeeper, Carson D’Ambrosio. The goal came 10 minutes into the second half.

“We talked about that if we could keep it tight, you always felt we had a goal and what a good goal it was,” O’Leary said. “The guys did great, a good combination play and a quick intricate pass and a terrific goal.”

Failed opportunities on the offensive side of the ball forced both teams to head into halftime scoreless. The Minutemen were able to tire out the CCSU defense, eventually leading to the lone goal.

“We’re just getting better and more fit and at the end of the game. We’re not making as many mental mistakes,” senior midfielder Ty Goncalves said. “And we’re winning first balls and second balls and not giving other teams chances to score.”

Not long ago, there was a high possibility of the Minutemen relinquishing such a narrow lead. However, in recent games UMass has done a tremendous job of staving off opposing offenses.

“That’s a big theme for us,” Goncalves said. “We want to be going from the first minute of the game and we want to just wear the other teams down, and we know we’re a fit team and we know the later it gets the better chance we have at holding the other team off.”

UMass has not let up a goal since its game against Hartford on Sept. 24. Goalkeeper Jorge Becerra saved three shots against the Blue Devils, having saved all seven shots on goal made in the last two games.

“Overall we are a little more resilient now, we got three clean sheets in the last four or five games,” O’Leary said. “They always say that if you get shutouts, you stand a good chance of doing some good things. We did that today.”

It’s all Atlantic 10 opponents from here on out for the Minutemen. UMass is entering conference play in a much better place than it was a year ago. However, how the Minutemen play in this next month will determine their ultimate fate.

“You know, [A-10 games] are all like finals, we can finish high up, we can finish last,” O’Leary said. “We’ve got one point, that will see us last so we’ve got to find ways to get more points. We’re going to Fordham who are a terrific team, we battled them last year twice. We beat them here and we lost in the quarterfinals to them. So we’re expecting a very hard match and looking forward to it.”

UMass has already gotten a taste of the A-10 once this season when it tied Dayton 0-0 at home last Saturday. This Sunday’s match against Fordham will be a rematch of last season’s A-10 quarterfinals game. The Rams (3-3-3, 0-0-1 A-10) have a meeting with Dayton on Oct. 5 prior to their game with UMass.