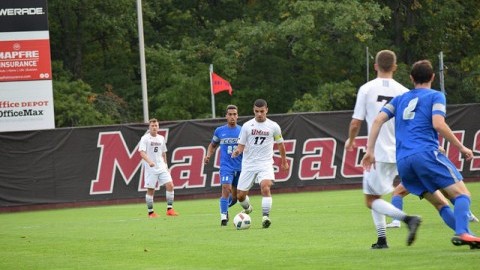 While outside temperatures are beginning to turn from hot to cold, the opposite has been true for the Massachusetts men’s soccer team’s offense moving into the fall.

UMass’s lone goal came from junior midfielder Henry Steinkamp, who took his shot from eight yards out crossing from the right post to the left corner with 35:08 left in the second half.

“I think it came off of a throw in,” Goncalves said. “Barrowman picked it up and laid it back and I saw Henry [Steinkamp] run behind the defender’s shoulder and he took a great touch and a good finish.”

“We just threw it in really quick,” Steinkamp said. “I just ran behind the defense because they weren’t set and I think we just caught them off guard.”

While the Minutemen have only scored once in the last two games, they have combined for 31 shots in the 200 minutes they have played in that time with 15 coming against CCSU (1-7-2, 0-0-0 NEC).

With the exception of the final 20 minutes, UMass spent much of the game playing in the attacking half of the field. The Minutemen also displayed consistent passing late in the first half and early in the second.

The improved passing in the past couple of weeks for the Minutemen is something that was absent in the first several games of the season and it could be attributed to better chemistry among the players, but Steinkamp has a different theory.

“I don’t think it’s chemistry,” Steinkamp said. “I think we’re working more together as a team and there was a spell (earlier in the season) where we just worked on possession and keeping the ball and I think that it shows now later in the season.”

Whether it’s hard work or improved chemistry, UMass has definitely found its stride on offense and has created more scoring chances than they have all season.

The past three games, which include a 0-0 draw with Dayton, a 3-2 victory over Hartford and yesterday’s win over the Blue Devils, they’ve also managed to take 21 corner kicks with four in Tuesday’s game. That totals more than the other eight games they have played this season combined.

The Minutemen’s corner kick totals are indicative of how much more often they’ve been playing in their opponent’s half of the field, and that trend continued today.

“We want guys who have the confidence to make mistakes,” O’Leary said. “Usually if you’re willing to make a mistake, probably something good will happen.”

UMass will look to maintain its current hot streak now that it has wrapped up its non-conference schedule and will only be playing A-10 opponents for the rest of the season.

The Minutemen’s next game will be on the road against Fordham on Sunday with kick off set for 1 p.m.