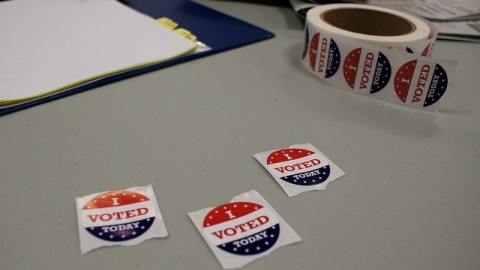 With the upcoming elections the University of Massachusetts Democrats and the UMass College Republicans, have been discussing and preparing strategies for the upcoming national and state votes.

As November draws closer, the two organizations are mobilizing to bring attention to their party’s issues and register new voters. Additionally, they are working to get key speakers to attend rallies. In this election cycle, student leaders see a chance to bring new and more diverse voters into their ranks.

Both groups want to provide the information and the support necessary to vote smart. They have both held meetings not only intended to discuss party and national politics, but also address the upcoming statewide ballot initiatives. As a result of this shift in strategy, voter registration drives have played a key role in the UDems’ toolset.

“One of the positions on the board is Political Director Jonah Carlson, [who] did a lot of research and reading on the ballot initiatives to prepare a presentation of each ballot question, how it would appear, what the pro arguments are, what the con arguments are, and really important actors on each side,” said UDems President Liana Ascolese about the importance of local ballot initiatives.

The UDems have been working locally in Northampton with the 413 for HRC campaign office and have gone to the cities of Keene and Salem in New Hampshire to phone-bank and canvass for Presidential Candidate Hillary Clinton. They have also been working with Eric Lesser’s campaign who is running for the State Senate in the 1st Hampden and Hampshire District election.

Because Massachusetts has traditionally been a blue state that sometimes swings red, the UMass Republicans have put their efforts into the state election. They have been focusing more on phone banking for Chip Harrington, who opposes Lesser in the 1st Hampden and Hampshire District.

On national issues, the UMass Republicans are divided about a Trump presidency. However, differences have not slowed them down.

“We, as the E-Board, try our best to stay as impartial as possible regardless of what we believe, so we can foster as much discussion as possible,” said Alex Gearty, UMass Republicans president. The group has been using the intense discourse as an opportunity to expand the political conversation.

The UDems and the UMass Republicans want to provide anything they can for the students and the local community, so they encourage anyone to contact them if they’re interested in attending their meetings,  joining, or going out to canvas.

For the debate, the UDems held a watch party while the UMass Republicans watched the debate during their meeting hours.

“We encourage people from different backgrounds, even though you’re not a Republican, to come [to our meetings],” said Gearty.