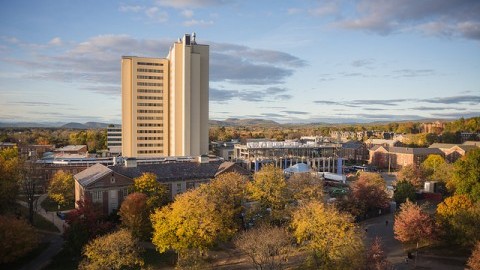 For the second year in a row, the University of Massachusetts has been ranked in the Princeton Review’s Top 50 Green Schools.

Ranked 41st in “The Princeton Review’s Guide to 361 Green Colleges,” UMass is recognized for its alternative transportation options, use of local, organic food and sustainable initiatives including a sustainability-focused degree program and Sustainable UMass.

The guide cites UMass’s bike-friendly community, including the Student Government Association’s Bike Share Program, as one of the reasons for UMass’s ranking. Another reason is that SGA is in the process of implementing compost stations around campus.

“Our University is making incredible strides towards sustainability with the implementation of the Bike Share Program; we’ve recently added 10 new bikes, and expanding the accessibility of composting with new outdoor receptacles,” said SGA Secretary of Sustainability Ainsley Brosnan-Smith.

As previously reported by The Daily Collegian, the SGA appointed a Bike Share Manager, and they have plans to increase the number of bikes in the program to 38 within the next six months.

The Pioneer Valley Transit Authority (PVTA), which is free to ride for UMass students, is another alternative transportation option that contributed to UMass’s ranking.

Additionally, the guide notes the use of local, organic food, citing that 14% of the food budget is spent on natural ingredients. In August, UMass Dining topped the Princeton Review’s ranking for Best Campus Food, and the fresh, local ingredients were a contributing factor to the ranking, according to UMass’s press release.

Established this spring, SES is intended to “serve as a central hub for a suite of academic programs, research, innovation, outreach and extension activities focusing on finding solutions to the complex, global environmental challenges of the 21st century,” according to the press release announcing the school’s creation.

The guide also noted the Chancellor’s Sustainability Advisory Committee (CSAC) as a factor in the ranking. Sustainable UMass, which works to raise awareness about sustainable initiatives on campus, is another factor that impacted the ranking, according to the Princeton Review.

Additionally, Princeton Review recognized UMass for its commitment to 100 percent of new construction being LEED, or Leadership in Energy and Environmental Design, certified.

Brosnan-Smith credits the sustainable movement to students, and SGA is already looking toward the future.

“A lot of our success comes from the involvement and determination of students who pressure administration to change the University’s unsustainable practices. Moving forward we would like to see the University abandon the plastic, single-use water bottle branded ‘UMass’,” Brosnan-Smith said.

Elizabeth Wallace can be reached at [email protected]