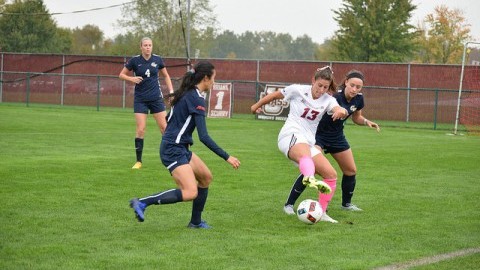 On a wet and windy Sunday afternoon in Amherst, the Massachusetts women’s soccer team was washed out by George Washington 2-0.

“The game came down to about 15 minutes,” Minutemen coach Ed Matz said. “We lost what we were trying to do defensively and they scored two goals very close to each other.”

Lina Proska got the scoring started for the Colonials after she beat Minutewomen goalkeeper Cassidy Babin 15 yards out following a centering pass from teammate MacKenzie Cowley in the 21st minute.

Then in the 27th minute, Cowley scored a rebound goal after the initial shot from Proska was turned aside by Babin to give GW a 2-0 lead.

UMass showed some frustration following the second Colonials goal as evident by the two yellow cards given to the Minutewomen’s Julia Weithofer and Daniela Alvarez.

“We were late in on tackles and when you’re a little frustrated you come in a little late,” Matz said. “We got those two [yellow cards], and we talked to those kids and it’s uncharacteristic, but I think those were just frustration.”

UMass concluded the first half with six shots, two corner-kick opportunities and two saves from Babin.

The second half was a much different story for the Minutewomen as they were buzzing all around the Colonial end and outplayed GW for the majority of the half.

“I thought in the second half the ball was in their end the whole half,” Matz said. “It’s good to come out, but again what they were doing during that 15 minutes is what we prepared for. It was just a matter of adjusting defensively and making the switches and calling them out and we weren’t doing that. But we had a good second half and again we had some chances to score.”

UMass’ best chance of the afternoon came when senior captain Megan Burke had possession just outside the Colonials net but was denied by GW goalkeeper Miranda Horn with a leg save.

The Minutewomen had multiple opportunities to get back into the game, however they couldn’t capitalize on the chances they were given and fell for the fifth straight game.

The Minutewomen finished the match outshooting the Colonials 11-9, and had twice as many corner kicks with eight, compared to GW’s four.

“We have to win, in my opinion – four out of the last six games – or got to win four games somewhere along the way to give us a good chance,” Matz said. “Maybe three but we’re shooting for four.”

Matz added: “Our goal is to make it to Rhode Island and that’s still obtainable. I asked them if that was still their goal and every single person said yes. It’s tough for their responses right after a loss, they’re frustrated, they’re mad, but we have to fly down and try to get a good result in Davidson on Thursday.”

UMass loses another heartbreaker in double-overtime

The Minutewomen lost 2-1 to George Mason in a double-overtime thriller at Rudd Field last Thursday.

After Alvarez scored in the 52nd minute for UMass, the Patriots answered right back to tie the game and send it to overtime.

The first overtime produced no results but the Minutewomen had a grade-a chance to end it in the second overtime period when junior Gabriela Kenyon was all alone on a breakaway but shot the ball just over the crossbar.

Then, in the 107th minute, Patriots forward Emily Littell scored the game-winner 15 yards out through traffic to sink the Minutewomen and hand them their fourth straight loss.

UMass did manage to shutdown reigning A-10 offensive player of the week Sarah Hardison in this one, as she managed only four shots throughout the contest.

Babin was active in this match as she had to make eight total saves, doing all she could to keep her team in the game.

The Minutewomen were outshot 21-11, and had fewer corner kick opportunities with three, as opposed to 13 for George Mason.