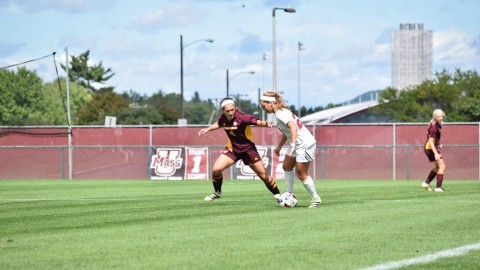 The Massachusetts women’s soccer team went into double over time for the second time in three matches Thursday night against La Salle. However, similar to UMass’ trip to Brown Sept. 15, it failed to score in the first Atlantic 10 conference game of the season.

“I thought we competed really well,” UMass coach Ed Matz said. “It was a game played in driving rain and wind and it was a typical A-10 match that really could have gone either way, and it was really just a heartbreaking way to lose a game with just a couple of minutes left on the clock.”

With only four minutes left in overtime, La Salle’s Deja Davis intercepted a UMass pass and hit Bower with a through-ball that allowed her to pull away from the defense and slot home the game-winner on a breakaway.

Although losing a game in double overtime is not cause for concern for the Minutewomen, what is concerning is that this defeat marked the third straight game in which they failed to score. Additionally, they have only managed to put home two goals in the month of September.

“As a player and as a coach you need to move on and you need to look at the next match and not think about the opportunities (to score) that they missed or passed up,” Matz said. “They need to move on and make sure those opportunities are present and we need to give them the confidence to finish in the future, you have to keep their confidence up.”

That next match is against he Richmond in Virginia on Sunday afternoon at 1 p.m. Sunday marks the fourth-straight road game for UMass.

As Matz eluded, in all of conference play in the A-10 this past week not a single road team claimed a victory, and only two of them even earned one point with a draw. Points in road games are at a premium in the conference right now.

“Right now, we are just looking for points,” Matz said. “Last year we got one point on the road in the A-10’s, so if we can somewhere along the way in our road games whether it be Sunday or later on get three points and do what we did at home last year at Rudd field then we will be ok.”

The Spiders (5-4-1, 0-1 A-10) pose a bit of a different challenge to the table than did La Salle. While the Explorers’ offense is focused on trying to get off as many opportunities as possible (17 total shots Thursday), the Spiders run a more possession-oriented offense focused on controlling the ball and pace of play.

“Richmond is very good and it is a tough place to play so I think we need to continue to build on our defense and give out offense the opportunities to put one away for us,” Matz said. “We have been working on our finishing and we are going to have a quick, hard, intense practice today just working on that finishing.”