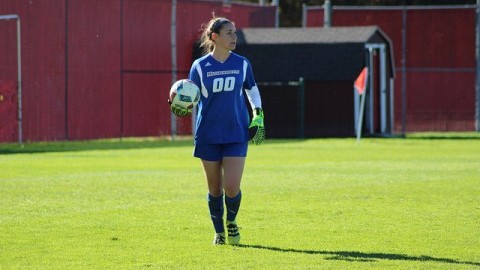 The Massachusetts women’s soccer team welcomes the Atlantic 10’s number one seed in Saint Joseph’s to Rudd Field for its last home game of the regular season Thursday afternoon.

Since then, St. Joes have enjoyed a 15-game unbeaten streak and were recently ranked first in the National Soccer Coaches Association of America (NSCAA) Mid-Atlantic Poll this week.

“I think we have a good knowledge of Saint Joes,” UMass Coach Ed Matz said. “We’ve watched a lot of game film.”

UMass (3-9-3, 1-5-2 A-10) heads into Thursday’s match emerging from their third win of the season, celebrating a 3-0 senior day victory over Virginia Commonwealth. The Minutewomen put up their most goals in a single game, breaking their 10-game winless streak.

After senior day, UMass increased its tally of goals on the season to nine, while the Hawks travel to Amherst with a total of 41.

Though offensively the differences are apparent, on the defensive end the two teams are rather evenly matched, with the Minutewomen allowing the same amount of goals scored as the Hawks.

“We have to be aware that they have two very special players,” said Matz. “So we’re just trying to be aware of them at all times.”

St. Joe’s forward Dakota Mills leads the Hawks with 13 goals this season, while also adding four assists. This past week, Mills was named to the Top Drawer Soccer’s team of the week after scoring a combined three goals and two assists against Richmond and Duquesne.

St. Joseph’s senior Emily Gingrich also holds a prominent place in the Hawk’s offensive game with 11 goals and three assists this season. She claimed the prestigious titles of the A-10 Offensive player of the week and Top Drawer Soccer player of the week within one day of each other.

Goalkeeper Cassidy Babin will be the other weekly award-winner on the field for UMass having recently been named the A-10 defensive player of the week after her career-high nine saves in a shutout against Duquesne.

Matz expressed his concern about the weather conditions predicted for game time and how Babin would handle standing in one place for a while and then being forced to act quickly and make a save.

“It’s hard to not only be facing an offensive powerhouse like Saint Joes, but when you’re standing a lot of the game and then you have to make a point-blank save, it can be difficult.”

Mollie Walker can be reached at [email protected] and followed on twitter at MWalker2019.