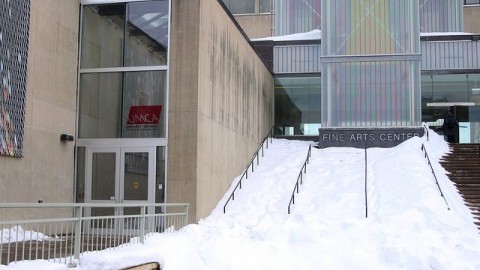 The University Museum of Contemporary Art recently opened a temporary exhibit titled “Human Animals: The Art of Cobra.” The exhibition, organized by the NSU Art Museum in Fort Lauderdale, has been in the museum since Sept. 15, and will be displayed at the University of Massachusetts until Nov. 20.

“Human Animals: The Art of Cobra” is comprised of the work of many European artists and poets from the 20th century. The art is inspired by pre-World War II surrealism and children’s art, stemming from the 1948 CoBrA movement, which was started by artists in an attempt to combine European communist politics and free expression art to create a new artistic expression. Many of the pieces in the exhibit feature colorful and abstract human-like figures and animals, ranging from oil paintings on canvas to a large metal, cage-like structure.

A more modern branch of this exhibit, “Cobra: Contemporary Legacy” features many works from Jacqueline de Jong, who is a Dutch artist whose work incorporates a wide range of mediums. These mediums include things like potatoes from her garden, which she covered with platinum and gold in a piece entitled “Pomme de Jong.” She aims to capture the relationships between humans, animals and the world with her art.

“I think the cage is very interesting,” Gerdes said. “I also think it’s interesting how they have a picture of some of the men who curated [it] originally … it’s so whimsical, everything is so whimsical.”

The University Museum is free and open to the public Tuesday through Friday from 11 a.m. to 4:30 p.m., and Saturday and Sunday from 2 p.m. to 5 p.m., and is located in the Fine Arts Center.