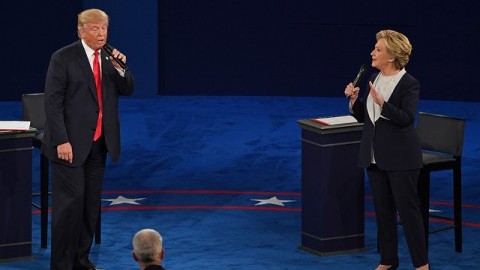 If we are going to take anything away from the first presidential debate, it is not going to be who won or lost. It is going to come down to rhetoric, what was said and how people received each candidate’s language.

Words matter. When Senator Claire McCaskill of the Democratic party was on “Morning Joe” last year, she defended her support for Hillary Clinton by saying her main concern for Bernie Sanders was that “He’s a socialist.”

Words that end in the form of an “ism” are words people latch onto. Mark Steyn says that these terms “are designed to be oppositional.” That is, if we are to assume such words come up in conversation between two people then these terms are often used to be purposefully antagonistic towards one another. Such “isms” like socialism and communism are, more often than not, used in areas away from academic settings. People refer to such words when arguing in order to further their personal point of view. In a 2015 poll, Politico found that more Americans were inclined to vote for an atheist than a socialist. “Just 47 percent of Americans would vote for a socialist if their party nominated one, while 50 percent said they would not, while 58 percent said they would have no problem voting for an atheist in their party.”

Let us refer back to Senator McCaskill’s Morning Joe interview in June of 2015. It was then that she deemed Sanders “too liberal” for America and compared his popularity to that of Ron Paul and Pat Buchanan. She then went on to say the following about Clinton: “This is somebody who can carry the torch of middle class opportunity without alienating a wide swath of voters by being, frankly, a socialist.”

Senator McCaskill deemed Medicare for all, a radical policy of Sanders’ which is fine except for the fact that Hillary Clinton, the candidate she is publicly backing, supported universal healthcare when running for president in 2008, a plan that was more liberal than the one proposed by Barack Obama at the time. Ironically though, it was Obama who was deemed the socialist.

This issue goes much deeper than supporting and rejecting candidates. Mississippi is the poorest state in the Union. A Democrat hasn’t won Mississippi in 40 years. It has the lowest per capita and median household income of any state, and the highest unemployment rate. Mississippi’s Governor, Phil Bryant, has implemented a policy called “My first job,” which dictates that everyone who wants a job in the state can have one. This of course, does not add up when almost 10 percent of the state’s population is without work. Roughly one fifth of Mississippi is on food stamps. Governor Bryant opposes the expansion of Obamacare, wishes to privatize social security, and has no legitimate plan for bringing his people out of unemployment.

How is the poorest state in the Union also the most conservative? Why is it that the state that is most dependent on the government for federal assistance has also historically been the one that is most eager to succeed from the Union? These are questions that this column won’t answer, but these are questions worth addressing.   People in Mississippi, much like citizens all over this country, hate socialism, yet without the social welfare state as we know it, these people would be left behind. See, if we remove the label that these policies fall under then there is more agreement. Let us use Obamacare as an example. Roughly 52 percent of Americans oppose The Affordable Care Act, but when the legislation was broken down and people were asked specific questions about it, more were in agreement on what they supported. When it came to “creating an insurance pool where small businesses and uninsured have access to insurance exchanges to take advantage of large group pricing benefits,’” 80 percent of Republicans and 75 percent of Independents were in agreement. The word “Obamacare” becomes a trigger, preventing people from reading between the lines and seeing what it’s all about.

If we are to turn our attention back to the presidential debate last week, we should focus on how Trump controlled the term “politician,” using it as an attack on Clinton, clearly lumping her together with the rest of Washington. He framed the discussion as her being the politician who did all of these bad things, whereas Trump fashions himself as the Washington outsider, an underdog of sorts who will fix what is wrong with this country. Yet, how he will fix it or what he will do still remains unclear.

When Trump referred to Clinton as Secretary Clinton, it wasn’t so much out of respect as it was a way to connect her to the Obama administration. This of course isn’t to say that Clinton referring to Trump as Donald isn’t also disrespectful. But I can’t help think that if the labels went away, and talk of policy moved to the forefront, how the rest of the election would play out. People latch on to words. This is how Trump has gotten this far. “Crooked Hillary,” “little Marco,” “Low-energy Jeb”—Trump blew all of them out of the water not because of who he is, but because of what he said and how he said it.

If this election is about anything it is about linguistics and the power of language. Rarely have we seen language used in such a personal and non-professional way. Trump garners his support because of his ridiculous statements. The more he focuses on clever word play and less on actual policy the better his chances seem to be. Then again, when it comes to the millions of undecided voters in this country, I hope we can all agree on what matters more.