A day in Trump’s America 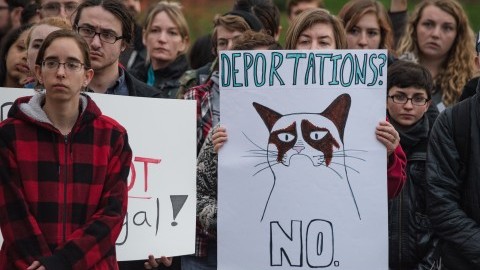 I hate to be yet another person adding to the noisy rhetoric about Donald Trump winning the election, but I feel like I would be shirking my duties as a journalist if I let this opportunity go.

On the night that Donald Trump announced that he was running for President of the United States, we all laughed. There was no way an inexperienced businessman that was most famous for calling women ugly (just one of his many offenses against people) would get the Republican nomination.

But he managed to defeat 16 contenders and earned that nomination. We all still laughed it off, giggling at the idea that a reality star could become president of the most powerful country in the world.

Election night came, and we all still scoffed at the idea that Trump could win. He was going to lose, badly, and history was going to be made with a woman at the helm of the United States of America. Just imagine my disappointment as the night wore on and we all gaped at our television screens as Trump’s electoral votes rose and hearts broke across the nation.

Right before I drifted off to sleep, I heard the cries of young men raucously screaming in the Southwest Residential Area, “Trump 2016! He won, and there’s nothing you can do about it!” I felt chills running through my body. Something in the air had changed. I suddenly felt unsafe in my own bed, as if these young men were going to burst into my room and scream in my ear.

The next day, I woke up and opened my curtains to the gloomiest day of the year. Walking around campus, I heard snippets of conversation about the election, some of them disheartening:

“I just can’t believe this. What woman would actually vote for him?”

“Riots are going to break out. We can’t just accept this.”

I kept my head down and raised the volume on my music, trying not to think too much. Protestors marched in front of Goodell Hall, chanting obscenities about Trump. Two girls stood in front of the Integrative Learning Center, silently and stoically holding a poster that simply stated, “Love Trumps Hate.” I felt chills run through me again. It began to rain and I thought, “How fitting.”

I finally managed to pinpoint the source of my anxiety and the chills as I heard more people express their fears about a Trumpian America. I realized that we were all so unsure of ourselves and of where we stood.

I pondered my own situation. I am an American citizen, but being half-Lebanese and half-Ethiopian and the daughter of immigrants, I am particularly offended by the Trump ideology. One of my friends living abroad called me and said, “How does it feel that your president has been hateful towards both halves of your identity?” He laughed, but I felt my stomach drop.

Would I be screened every time I wished to return to the States from Lebanon? Was I now officially labeled a threat to the American people? I, a person who loves the United States as a second home, couldn’t fathom the idea that I was now an outsider looking in on a place that, according to my future president, I technically don’t deserve to call home.

In one day with Trump as president-elect, I felt more unsafe than I had when I was living in war-torn Lebanon in 2006, as the Israeli army ravaged my country. And still people wonder, “Why is everyone freaking out so bad? It’s not a big deal.”