A Muslim on election night 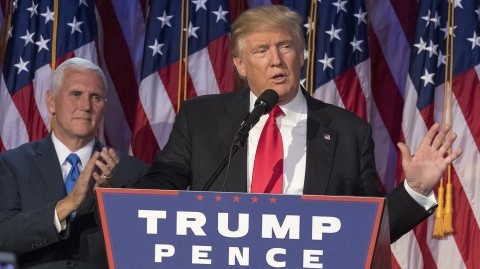 I’ll admit it: at the start, I was one of those people who thought that this would be funny. That we could all watch this guy bumble his way through the primaries, saying one ridiculous thing after another and giving late-night television the kind of material it has been missing since Sarah Palin. But I am no longer laughing.

From the beginning, I never thought this race was really about policy or about progressive ideas against conservative values. A candidate like Donald Trump kind of throws those things out of the window. I’ve always been fairly liberal, always far more aligned with those on the left than those on the right, but my dislike of Donald Trump was never about his tax plan, his views on abortion or his foreign policy. It also wasn’t just because I was a “wimpy liberal,” as a former high school classmate of mine liked to say.

When you’re a Muslim in this country, there are certain things you learn to deal with. People ask why you’re not drinking water on a hot day in July, and you have to explain what Ramadan is. Middle school rolls around and the first wave of terrorist jokes comes with it, with one kid in my sixth grade homeroom telling me “Allah hu akbar” – a common Arabic prayer phrase meaning “God is great” – was a terrorist cry, and another asking me why my family and I support Osama bin Laden. As I get older, I see the pundits on Fox News asking why it’s always my religion causing the problems, and I hear my high school classmates wondering aloud, “But why are they so violent?” You deal with the Islamophobia, ranging from the benign to the malicious and from the simply misinformed to the purely intolerant.

But I really never thought that when the time came to choose between two candidates, both of whom are full of imperfections, that the one who proposed banning Muslims until we “figure out what is going on” would come out on top.

So there I sat, in the corner of Worcester Dining Commons, watching the results roll in in utter disbelief. My politically-minded side was concerned for the country; we had made the wrong choice, and a whole host of problems would come from that, ranging from a woman’s right to choose to the strength of the economy and everything in between.

But putting aside my political leanings and my opinions on legitimate policy issues, I am a Muslim. I had been raised as a Muslim my entire life, learning of a religion and a faith of peace, of love, of hospitality, of generosity. I am a Muslim living in a country that, in one night, decided that maybe people like me didn’t belong here. A country that decided in the moment of truth that we really might have to ban Muslims until we “figure out what is going on.”

I realize that the ban on Muslims wasn’t the key issue of this election and that Muslims are not the only people affected by this. I know there are members of the Hispanic, African-American, and LGBTQIA communities that know how I feel. I don’t truly believe that Donald Trump will be able to place a ban on Muslims entering the country, and I’m honestly not worried that any real consequences will come of this, at least personally, solely because of my faith. But at the end of the day, it doesn’t matter. What matters for someone like me is that America made a choice, not between liberalism and conservatism and not between a Democrat and a Republican, but between ideas and Islamophobia, between policy and demagoguery, between unity and hate.

And here I was, a Muslim on election night, born and raised in this incredible country, a proud American citizen, feeling like an outsider looking in.