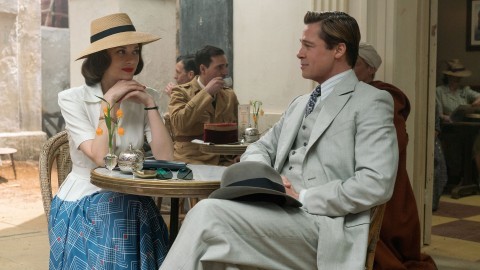 Making a romance work is actually quite simple. All you need are two attractive actors with chemistry and a good screenplay that supports these characters and allows the audience to fall in love with them. In “Allied,” where Canadian spy Max (Brad Pitt) falls in love with his French nationalist partner Marianne (Marion Cotillard), only one of these is achieved.

Director Robert Zemeckis pays tribute to the 1940s in more ways than one. He goes beyond the beautiful costumes and sets of the period. First, he pays homage to probably the most iconic World War II romance film of all time by beginning his film in Casablanca, Morocco. But probably the most impressive feature of the film is that the majority of it was filmed on sound stages, just as Alfred Hitchcock did.

It doesn’t just look like this movie takes place in the 1940s, it feels as if the film itself were made in the 1940s. Cinematographer Don Burgess and Zemeckis blend the technology of the era and modern day filmmaking, successfully capturing the identity of a story from that period. It’s done so well that if this movie were placed alongside films made in the 1940s, I may not be able to tell you which one was made in 2016.

Pitt and Cotillard make a great team in Casablanca, disguising as man and wife to assassinate a person of importance to the Axis Powers. Pitt, in his third World War II film, plays an honorable, noble and easily relatable man. His intentions are pure and revolve around protecting the people and country that he loves.

Cotillard proves once again that she is a force to be reckoned with. She somewhat channels the essence of Ingrid Bergman’s Ilsa, just a more provocative version of her. Speaking both in her native French and in English, she keeps you guessing until the end regarding the origin of her character.

Pitt and Cotillard are beautiful together, and the veteran actors also have a fair amount of chemistry to boot. It’s clear from the moment they meet that they are attracted to each other. However, they understand what they were both trained to do, and you can see the internal struggle in both their eyes as they fight their feelings for one another.

Steven Knight’s screenplay is where this movie takes a huge hit. The first act, in which Max and Marianne fall in love, takes up only around 30 minutes of the film’s two-hour runtime. The rest of the film revolves around Max trying to prove that the love of his life is not a double agent (which is what his superiors believe).

Even with the best actors on the planet, it is not physically possible to develop an organic and true relationship in 30 minutes. The result is you pretending to root for this couple for the next hour and a half because you need to in order to be entertained. Quite simply, if you don’t care about the couple as a whole, why would you care if Marianne ruins it by being a double agent?

If there were more time spent in Casablanca developing this story and letting the characters fall in love with each other, this movie would be a success. This is what, in the end, separates this film from the films made in the 1940s it tries to emulate. Those films rely on a strong but subtle approach to storytelling that marinates throughout the course of the film, something that is missing here.

In all films, whether made in the 1940s or the present, the script is just as, if not more important, than what’s being seen on screen. Unfortunately, Zemeckis got wrapped up in the visuals of this film. He focused on making sure this film looked like a 1940s artifact made in the 21st century, but in doing so, he neglected the most important part of the film: the story.