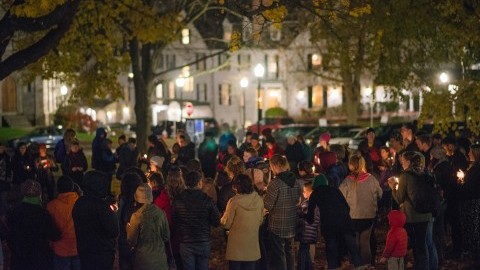 Around 150 people gathered in the Amherst Town Common for a candlelight vigil on Wednesday night, to stand in solidarity following Hillary Clinton’s defeat to Donald Trump in the 2016 presidential election.

“(Fear) is what I’m feeling all around,” said Dr. Amilcar Shabazz, a professor in the W. E. B. Du Bois Department of Afro-American Studies. “I feel a lot of people are feeling very afraid that this is kinda a beginning of a long process of decline.”

The vigil was organized by Vira Douangmany Cage, a member of the Amherst School Committee, the Amherst NAACP and a University of Massachusetts alumna.

“People needed to come together and needed a time and a place and I was just there to facilitate that,” said Cage.

Some members of the crowd were hugging and crying as volunteer speakers took turns sharing their thoughts and emotions following the presidential nomination, as well as singing songs to the group.

“I cried. It’s devastating, it’s heartbreaking for everyone I know and everyone I don’t know,” said Sidney Keise, a UMass freshman Spanish major. “This isn’t a man I want holding nuclear codes.”

Stefan Geller can be reached at [email protected]